Gurley on the "Lombardi sweep"

I came across this Grantland piece (by Chris of Smart Football fame) while researching the post on Quayvon and the H-back role. And I just couldn't seem to throw it away for some reason. And then it dawned on me. Watch it with me here:

The first thing you notice is how the Bears safeties are definitely expecting an Aaron Rodgers pass. A large part of the reason for the success of the play is due to how deep they are at the snap of the ball. Secondly, there's the guard pulling hard, even ahead of the quick toss to Lacy. And lastly, the blocking on the edge by the tight end and the receiver is very reminiscent of what we've seen from experienced Georgia receivers during the Richt era.

So we certainly have a comparable running back to Eddie Lacy. And a receiver doesn't see the field at UGA unless he can block. If we can find an athletic guard to fill the cleats of Burnette and pull with bad intentions in their heart, then there's only one piece left to the puzzle - making those safeties back peddle like that. Let's face it, Mason isn't going to see defenders that deep with Gurley in the backfield unless he can make them fear the consequences.

Anyway, it's fun to think about actual football isn't it? 168 days y'all. But only a few more until spring has officially sprung!
Hunker'd Down by Bernie at 5:01 AM

Proof that Dawgs love Pi too

Just too awesome not to share. GATA Coach Lilly.

Hunker'd Down by Bernie at 7:11 PM No comments:

How does Quayvon fit into the "H-back" role?

“I don’t know if he’ll even take any fullback reps,” Bobo said of Hicks. “… I think he plays with a good base. His issue sometimes blocking has been out in space, which causes him not to fit up properly. So we think getting up there close to the line will give him a chance to be successful in the running game. Now the passing game is going to be foreign. He’s used to running in the flat and that’s about it. So he’ll have to run some different routes and that will be an adjustment for him.”

Having had a week to process this, the move is mostly because of the lack of depth at tight end. With Jay Rome missing spring practice while recovering from foot surgery, Bobo will only have the services of Jordan Davis, plus walk ons Jack Loonam and Jared Chapple this spring. And since Quayvon Hicks played some tight end in high school at Pierce County the transition there should be a smooth one during spring practices, which begin in earnest next week. 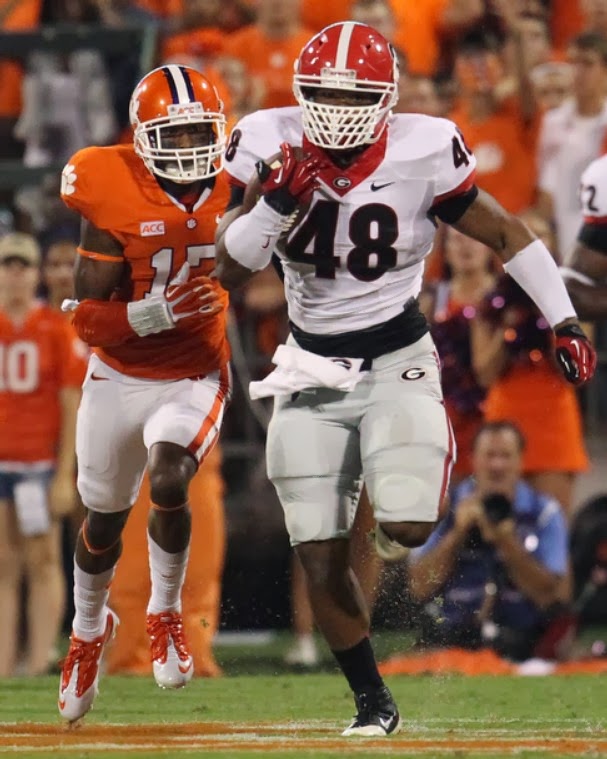 But it also appears as if Hicks is being shifted into a different role as he heads into his junior season - the H-back. This is generally a hybrid tight end position that utilizes a lot of motion pre-snap. Motion makes the defense think before reacting. The offense can set the H-back up right where they want him just before the ball is snapped. This gives the defense little time to adjust and suddenly the play is beginning and the linebackers are still thinking about what they're seeing pre-snap. And as we all know, a defense that is thinking is not reacting nearly as quickly as it would prefer.

Although the H-back has been utilized in many ways since its inception, the fundamentals for the H-back remain the same - block, run and catch, Similar to a fullback, the H-back must run downhill to help create running lanes for the ball carrier. Meanwhile, running with the football out of this position typically comes after catching a pass rather than after a handoff. A good H-back will be able to do all of these things equally.

So if this transition is a successful one, what can we expect from Quayvon this fall? Looking over his 2013 stats paints a picture of inconsistency. On one hand he averaged 9.3 yards per touch. On the other that only includes ten rushes and five receptions. The reality is that Hicks struggled to find snaps at fullback behind Merritt Hall and also dropped some passes that would have possibly helped him fit better into the offense. Hall is almost exclusively a blocker and has clearly established himself as the #1 fullback for the next two seasons. Hicks adds some other dimensions for Bobo to utilize, especially if he can prove to be a dependable target in the passing game.

The good news is that the motivation should be high for Quayvon this spring. I would imagine he's eager to prove his versatility as a player in this offense, both for Georgia as well as his future stock in an NFL draft.

What do you bet that Governor Deal spent more time bragging about Aaron Murray sitting at his gubernatorial desk than the former Georgia quarterback did? 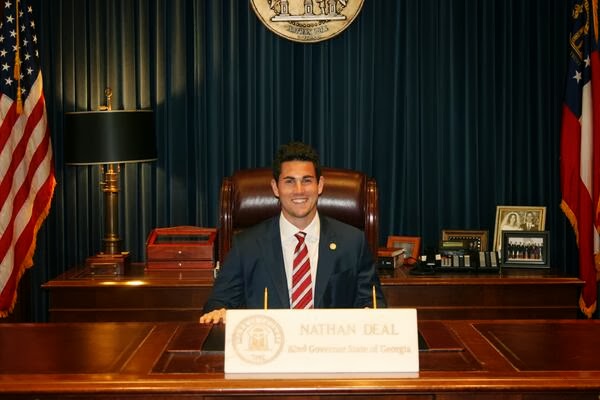 I mean, no politician has ever polled as high as Murray is right now.
Hunker'd Down by Bernie at 4:41 AM

As parody twitter accounts go, notrynerankin isn't better than the actual guy's. But that doesn't mean it ain't hilarious.

Email ThisBlogThis!Share to TwitterShare to FacebookShare to Pinterest
Dawg Tags: Tweets for Twits

And the word "injury" means "a small hurdle".

A year was added to Bobo’s three-year contract signed last offseason that will extend the deal now to Dec. 31, 2016 or the date of any postseason bowl played in January 2017.
The unsigned amendment is dated Jan. 27, 2014.
Bobo, entering his 14th season on staff and eighth as offensive coordinator, is still making $575,000 under the contract.
Despite a slew of injuries to top playmakers on offense last season, Georgia finished 17th nationally in total offense at 484.2 yards per game and 21st in scoring at 36.7 points per game.
Georgia set a program record for total offense and finished about a point behind its scoring average record set in 2012.

Humpday Hilarity - some of the best southern sarcasm underneath a hat

The Punchline and the comedy world as a whole lost its beloved, smart-witted, sarcastic, opinionated uncle a couple weeks ago.

Add former offensive lineman Kellen Williams to the ranks of players defending their coach against malicious attacks on his "process" and alleged hidden agendas.

"He knows better than anyone in the country how to stop it. Obviously, the Oklahoma game and Auburn games weren't just on him. I was a senior and it was kind of on us as well."

Williams went on to echo the comments made in recent months by departing seniors AJ McCarron and Kevin Norwood, both of whom said some of the younger players on Alabama's roster didn't "buy in" to Saban's trademark "Process."

In his five years at Alabama, Williams said there was a "big difference" between the three national championship teams and the two in which the Crimson Tide came up short.

By the way, where are all of Bielema's former players these days? Under a rock somewhere?
Hunker'd Down by Bernie at 8:58 AM

"...humans are consistently about two and a half times more sensitive to losses than gains."

Interesting read here (h/t AHD) mixing in human nature and how to better understand some in-game coaching decisions. As the quote above suggests, some of the findings could be expected. I know the low I experienced walking away from Jordan-Hare in 2013 was a chasm that reached untold depths, while the high I experienced in the same stadium back in 2008 wasn't nearly as lasting.

But reading about how some have integrated science, history and the behavior of monkeys to make some sense to the game of football is entertaining in the very least.
Hunker'd Down by Bernie at 10:14 AM

The Language of Coaching

Baby steps. Solved most of the sound issues between episode 1 and 2 of The JunkYard Dawg Podcast. And getting a little more familiar with the production side of things. So things went smoother this go around. A little bit. Before next week's episode I'll have the feed worked out and ready for you to draw from iTunes or wherever you grab your podcast feeds from.

Until then, as promised. Here's the next episode - The Language of Coaching.


Here are the links from this episode. Thanks again for tuning in.