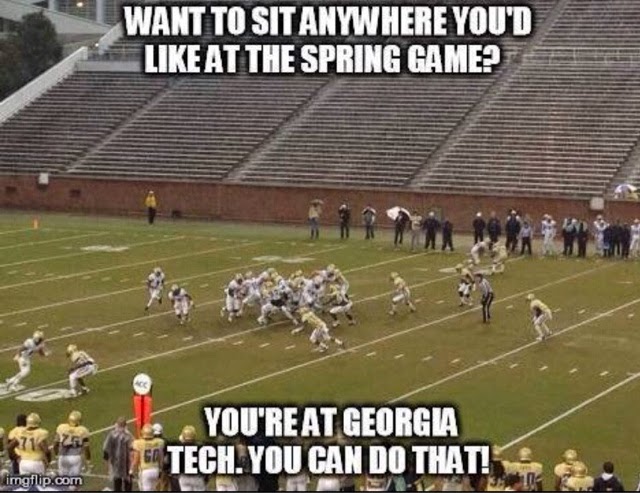 By now I would assume you all have read Steven Godfrey's "Meet the Bag Man". It was posted while I was on vacation, I finally got around to reading it earlier this week, and I've purposely let it simmer a couple days. I've really come to respect the work Godfrey puts out.

And that piece is some of his finest for sure. Because it's not easy to expose the underbelly of the institution that is college football and do so without it reading like a TMZ tabloid exposé. It's not easy to get someone who gives thousands of dollars to amateur athletes to come forward and talk about the hows and the whys. And consequently, it's not easy to fact check everything these anonymous sources are feeding you.

Someone once told me that every major college football program cheats, it's just that some are more adept and invested in it. At the time I wasn't so näive as to believe my program was above such reproach and dismiss it while holding fingers in my ears. But as I've come back to that thought over the years, and especially while blogging on such topics that reside in the SEC landscape and specifically its culture of recruiting, I've always wanted a glimpse of how it works.

Godfrey gives us that. He doesn't shine a searchlight onto a specific program and its under the table dealings. He doesn't paint a picture of greedy, power tripping boosters giving thousand dollar handshakes. But he does bring the line that these bag men dance along into a clearer focus. Is it about cars and spending money and nice clothes? Well, sure. But it's also about helping families, groceries and fixing a tractor.

Again, I'm sure you've read it already. If not, I highly recommend it. And I would also recommend listening to this episode of The Solid Verbal where Godfrey provides some more details of his investigation and what it was like to write such an article.

Check them out. It's an awkward dance at first, but I want to know...is it a reality you're comfortable with? Is it a tune you can snap your fingers to?
Hunker'd Down by Bernie at 5:33 AM 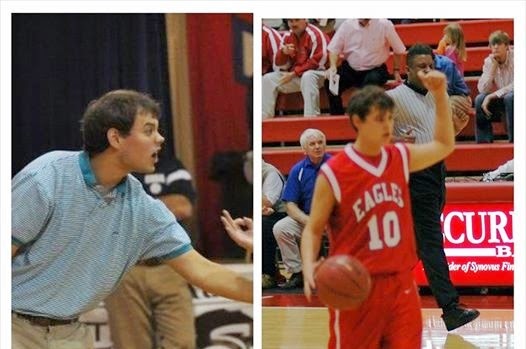 Many of you have probably met Scott Callaway: a fine man, friend of the blog and just a Damn Good Dawg. If you haven't had the privilege then you've certainly sat in the same stadium as him a time of two. I can assure you of that.

His son Adam sustained some significant injuries recently and Krisi has set up a gofundme account as a means of supporting the family through this difficult time. Scott shared that Adam himself was leading and coaching the family through, just as he's done on the basketball court for years. Thoughts, prayers, well wishes as well as any financial support I'm sure are greatly appreciated as Adam transitions into some very difficult physical therapy.

I'm thankful for Adam's spirit and that he's in the care of very good doctors. I wish him a speedy recovery. Thanks to those of you that took a moment to read this. And thanks again to Krisi for taking the time to support this great family.
Hunker'd Down by Bernie at 12:11 PM

Humpday Hilarity - Bubba is covered while Gus is scattered 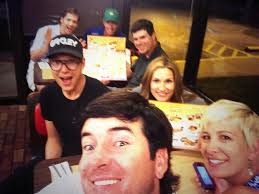 To compliment that, it turns out after Auburn's thrilling...dramatic...lucky ass win over Georgia back in November, Coach Malzahn couldn't get a booth....

He's probably more of a Huddle House guy anyway.
Hunker'd Down by Bernie at 11:44 AM

While recording episode 7 I casually mentioned something that got stuck in a frontal lobe's craw somewhere. Somehow, and in some kind of way, the name Tony Milton just jumped out of my mouth. Hopefully most of y'all remember him. Not exactly sure what made this player and this play specifically come to mind so quickly, but I decided last night that I would do some research on the former UGA running back.

What I remember
The most vivid memory I have of Tony Milton was in the game against Tennessee in Athens 2002. The year after the Hobnail Boot, sporting a rare two year winning streak, and things still weren't very easy against Fulmer's Vols. But we had a lead very late in the game and came up square against a fourth down decision: punt the ball and gain maybe 20 yards of field position yet still be forced to fight to win the game, or go for it and earn the win in one more play.

Coach Richt chose the latter. And he also relied upon the fresh legs of Musa Smith's backup - Tony Milton. Student Body right and 26 yards later the Dawgs had sealed a third consecutive win over Tennessee for the first time since the late 1980s.

What I reminded myself of
Using google I entered his name and found a lot of his recruiting information. Tony Milton didn't earn a qualifying test score while in high school and eventually settled into a decision to play for Syracuse, who wanted him to enroll as a partial qualifier. But he never played for the Orangemen. Meanwhile Mark Richt had moved from Tallahassee as FSU's offensive coordinator where he had recruited Milton some, to Athens as the head coach of the Georgia Bulldogs. And that's when he found Milton working hard to stay in shape until another football related opportunity presented itself. There were times Milton even slept and lived out of his car after high school, mostly due to a strained and difficult home life.

In many ways it was a match made in Heaven, Coach Richt and Tony Milton. For all intents and purposes, he loved the young man. Years before Greene/Pollack and Tebow ad nauseum, Uncle Verne enjoyed relating the tale of Milton's struggle to earn his way into Richt's backfield. Glory, Glory.

Milton served himself well as Musa's backup in 2002 and was considered the experienced option to replace all those carries once Smith left for the NFL. Still it was a crowded group behind David Greene and JT Wall, one that included Kregg Lumpkin, highly touted freshman Michael Cooper and the 2003 GDay hero Ronnie Powell. Still, injuries eventually took their toll and Milton finished out his career at Georgia mostly recognized for his play as a redshirt freshman behind Musa.

What I found out
Milton pursued a golf career a few years ago. Not sure how it turned out as those amatuer tours can be brutal, but I hope the guy is doing well today, wherever he is.

For a while he was the kid most had forgotten that turned into the man that Richt gave an opportunity. Nothing would really stand out today if you looked back at his statistics while in Athens. But by all accounts he made the most of the chance he was given, on the field and off. And if you fast forward to about the 2:07:00 mark of this video, you will see how Tony Milton was the number called in one of the greatest play calls of the early Richt era.

GATA Tony Milton! Damn Good Dawg!
Hunker'd Down by Bernie at 4:49 AM

There's coach speak and then there are Pruittisms

Sure, talk is cheap. But this is up there with his best quips since moving to Athens. 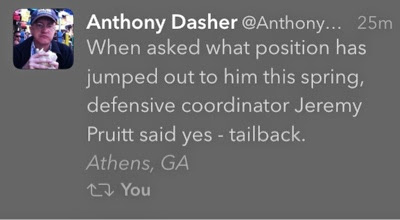 This is something Tyler and I touched on, but I wanted to give it some more thought after reading this piece by Paschall.


Most quarterbacks wear noncontact jerseys in spring games, but Bauta chose to invite the defensive hits by wearing white. The 6-foot-3, 216-pounder from West Palm Beach rushed six times for 35 yards, and Richt praised his decision to welcome live tackling and showcase his athletic ability in the run game.

"Whether that's the case or not, I'm going to be in there grinding every day like I'm first on the depth chart or last on the depth chart," Bauta said. "It shouldn't matter. To be honest, it's never going to affect my motivation of what I'm doing. If I'm the No. 2 guy or No. 3 guy or whatever the case may be, my preparation and work ethic can never stop.

"I have to be prepared, because you never know what can happen."

Truth. We all remember thinking Aaron Murray was on his way to a career game on Senior Night right?

Look, I have no hesitations in my confidence with Hutson Mason running the offense. Some uneasiness is there, but that is solely a product of no longer having a longtime starter under center. However, I do feel like we will need an added dimension at quarterback in certain situations.

For instance, there are two big differences I saw once Mason took over late last season. One was simply confidence. Murray had that as a fifth year senior; Mason lacked it, understandably. Secondly, and most importantly for the 2014 season, is zip on the ball. Mason will gain confidence aplenty as he continues to become entrenched as the starting quarterback for the University of Georgia and the leader in the huddle. But he won't have all of the throws we've become used to seeing.

You may read that as deep throws to the center of the field or deep outs to the sideline. But where it will truly manifest itself as a potential issue is in the red zone. There's just less time to put a pass on the money to the right spot before the whole window is completely shut.

Again, like Tyler said in the podcast, we may be proven wrong. I hope so. But what may be a valuable option, both in the short term and the long, is Faton Bauta. Even if he too doesn't have the arm to make those throws, or even if he doesn't quite have the grasp of the playbook yet to allow Bobo to keep the entire thing open, he could add another dimension with his running ability that would freeze linebackers long enough for a play to develop.

With that, the yards and the touchdowns will come. Without it, Marshall Morgan's leg may be our best red zone option.
Hunker'd Down by Bernie at 7:49 AM

The one and only Tyler Dawgden of Georgia Sports Blog joins us in the Junkyard to talk about spring practice news and specifically GDay. He talks about the secondary's development under new defensive coordinator Jeremy Pruitt, the embarrassment of riches at receiver and running back, the quarterback competition behind Mason, and of course, the new era of piped in music at Sanford Stadium.

The end got clipped a bit in editing, but this one is chock full of insights and information. Great stuff. Many thanks to Tyler for taking the time to join us!

Thanks for listening y'all! Here are the links from this episode:
- Tyler's recap post of GDay, and also his thoughts prior to the scrimmage
- Emerson's 10 players whose stock rose this spring
- Get the direct JDP Feed HERE
- JDP in the Android Store!!
- Or on Stitcher!!
Hunker'd Down by Bernie at 4:34 AM

Chad Kelly chooses not to get rid of cable.

Don't get escorted from practice by campus police. Get rid of cable.
Hunker'd Down by Bernie at 5:31 PM

A picture as great as his tournament. Congrats Bubba! 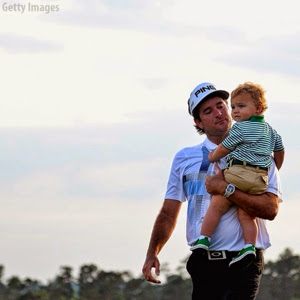 Got back into town late last night and haven't even seen the first clip from the scrimmage. So you'll definitely get better analysis elsewhere. I'll spend much of the day catching up on everything I've missed.
But I think these two tweets from a couple beat guys summarize the whole thing pretty well:

Good day for players to show off their skills in a glorified scrimmage. And a great day for fans to get a taste of a college football Saturday. In April.
Hunker'd Down by Bernie at 8:20 AM No comments: