The engiNerds lose their special teams coordinator (h/t Jason). Not sure if he was unimpressed by the spring game's weather, its attendance, looking for greener pastures, or was just plain old fired.

Here's more from the AJC:


The separation appears to have been unexpected, catching employees within the athletic department by surprise Friday. Asked for comment by text message, coach Paul Johnson deferred to Walkosky. The reticence of Johnson and others to comment or offer insight suggests that the circumstances of the job change were not typical.

Appears to have caught the hometown paper off guard as well. Not that that is unusual. Regardless, Walkosky leaving isn't minor news as he was really revamped Tech's special teams in his two seasons.

Curious, huh? I can smell the oil heating up in Coach Fish Fry's office.
Hunker'd Down by Bernie at 9:33 AM

Friday Misery stops by the woods on a snowy evening

Official off season update: miles and miles of weeks and days and months and hours and sunrises to go before Robert Frost shows his Pulitzers to Chris Fowler on the Gameday set. Sigh.

And miles to go before I sleep....Seriously, today is the second day of May. But in my mind we are still ever bundled up in the throes of mid February without a single stadium's bank of lights in sight. Perpetually in some epically slow motion, one like Penn Wagers' victims have never seen before...we plod along an inch at a time as we constantly check our watch. Each day the calendar changes, yet we only move further and further away from the next Clempsoning witnessing....ing. The clang of the Starkville bells are soundless. We yell and scream noiselessly.

We'll never get there. Never. Ever.

Never. So just go back to your village Bobby Frost. Your horse ain't about to see a Texas A&M sans Manziel on this day. It ain't gonna see Gurley truck no Tiger either. Another Auburn miracle? Bitch please. Time to move on son. We're like a sled stuck in an embankment of ice that will not melt until Hoover's Wynfrey Hotel is empty of the 25,000 media members for every one SEC coach this July.

His house is in the village though...Boy has it been a week for assholes and douchebags, no? Just last Friday I thought the Clippers were a Los Angeles based hair cutting chain, like SportsClips in Pacific Daylight Time. A dude rolls out of the surf and decides to get his dreads trimmed and boom! Walks back out half his original body weight.

But no, the LA Clippers are actually a professional basketball team that harbors a billionaire troglodyte and Marge Schott wannabe. I mean if you're going to be a racist, Schott set the bar for sports franchise owners making offensive comments later leaked to the public, then offending people even more during an apology. Sterling on the other hand will let this dispute drag on through court, insisting his only mistake was mixing that last gin and tonic.

Mr. Frost, your village must be missing its idiot.

To ask if there is some mistake...Oh God, actually, make that two idiots. Because then there was the arthropod on arthropod crime in Tallahassee. Seriously, who had Crab Legs in the office pool as having a tougher exoskeleton than Jameis L. Winston? This guy makes Teflon Don look like poor old Roy Sullivan. He's as slippery as an octopus, which come to think of it prey on crab legs too. So maybe Winston isn't an arthropod after all. Hmmmmm...

Hell, I don't know what the guy is, except yet another Heisman wielding douchebag. So there may definitely be a Heisman curse, but this guy is making Manziel look like a cute little Disney'd hermit crab. We've had BB gun battles, Burger King soda fountains, [redacted by Tallahassee Police Department], and now absconding with crab legs from a supermarket.

But let's cut Winston a little slack. I'll admit that I have left a store before without paying for an item. Granted, said item was in my toddler's coat pocket, unbeknownst to me. But that's basically the same thing right?

Let's play it out and see:


My scenario: "Wait. Where'd that pack of gum come from sweetheart? ... Oh shit. You just made Daddy a thief!"

Jammy Jam's scenario: Walks into apartment with bag of crab legs while roommate is sitting on a rusted out lawn chair eating pork n beans from a can. "Hey Jammy Jam, how much you pay for that?!!?" ... "Time. Just time eventually. And only about 20 hours at the mall giving away smiles for free. Ha! Hashtag Manzieling!!"

Yeh, that's about the same. And at least the crab legs didn't ingest any rohypnol. That we know of.

The woods are lovely, dark and deep...Lastly, there's me. Yes yes yes. It's true. I have been inconsiderate as well. Inconsiderate of your needs as one who reads junk that drifts around through the cyberspace inside your wifi connectivity. The byline up there clearly says a daily look and it hasn't been as such here lately.

Now, I could lazily point to the calendar and tell you to get over it. Or I could just change said byline to whenever I damn well please. Or I could secretly record crustaceanic racist conversations about lobsters and post them here as if they were blogworthy.

But that's just not how we roll now is it? No, I have promises to keep. And miles to go before I sleep.

Have a great Friday Reader. And maybe it will serve up some poetic justice. I don't know, like seeing Donald Sterling and Jameis Winston being forced to sit at a Publix promotional stand together dishing out itty bitty dixie cups of imitation crab dip and Ritz crackers for hours on end. If so, send me a video. That counts as blogworthy...in May.
Hunker'd Down by Bernie at 6:18 AM

Email ThisBlogThis!Share to TwitterShare to FacebookShare to Pinterest
Dawg Tags: A Confederacy of Dunces, bourbon and the * key, idiots not named Terence, this rotgut moonshine is making me sick

For those of you that may not have seen this yet... 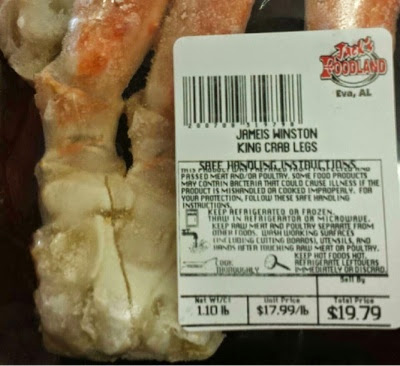 h/t Tammy
Hunker'd Down by Bernie at 5:18 AM No comments:

The Junkyard Dawg Podcast #8 - Mrs. Bernie makes a Honey Do It List

Plus, the dog makes an appearance, of sorts.

For the first time Mrs. Bernie joins me in the Junkyard to discuss how to manage drunk lazy ass Georgia fans in the off season and get those items off of the to do lists! This is like DIY 'tween the Hedges folks!! If you've ever wanted to hear the one and only boss that resides over the blog and all things BDB, this is your chance!

She's the biggest Georgia fan you've ever heard wielding a power tool yo!


Thanks for listening y'all! Here are the links from this episode:
- The Home Depot
- Get the direct JDP Feed HERE
- JDP in the Android Store!!
- Or on Stitcher!!
Hunker'd Down by Bernie at 4:33 AM

Low got the ball rolling. But then Blutarsky asked so I'll happily oblige. Although I am going to cheat a bit and list one or two that still play professionally. (I don't watch much football on Sundays, so in my mind these guys are already part of the gridiron history books.)

Spent several minutes trying to decide which pic of Winston and his prized seafood was my favorite. And there were just so blessed many to choose from....but I eventually settled on this one by @nick_pants because of his inclusion of Red Lightning as the Publix produce man. 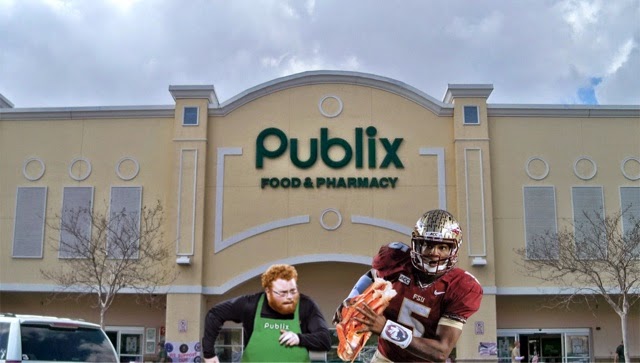 Take the day off Internet. You've earned it.

Email ThisBlogThis!Share to TwitterShare to FacebookShare to Pinterest
Dawg Tags: A Confederacy of Dunces

Bielema on Malzahn envy, footprint in Georgia and his secretive alliance with Saban

Arkansas' "Bielema Project" is turning out to be a case study in how a major college football coach adapts to life, recruiting, coaching, and public relations in the South.

In this interview he talks about how Malzahn had it so much easier as a first year coach in the SEC, how he plans to attack recruiting in the state of Georgia, and how everything between him and Nick Saban is above board. But what really stands out is his defense that it's always about player safety. Always.


I really do think that the only thing I regret about that whole conversation and things that were said … the only thing at the top of my priority list in player safety. Nothing will ever derail from that. Nothing will ever take me away from that. It’s something I believe in strongly. Our one solid and unwavering commitment to parents when we recruit young men is that we will look out for the safety and well-being of their child, no matter what. And I think that’s something that can never be lost in in translation.”

Truth. But then Carvell gives him full authority over the NCAA and asks him for one thing he would change. Rule change to address concussions? Manifesto to protect gassed defenseless players?


I would suggest, and I’ve put in motion now for about four or five years in a row now, the ability to bring in a parent on an official visit by plane.

Hey, I agree that a program should be allowed to bring in parents on recruiting trips. In a way, maybe that does address player safety...??

Arkansas has it tough this season. They open in Auburn and get Georgia (home) and Missouri (away) from the East. Bielema seems over his head down here. But fully admits this is what he wanted for a challenge as a head coach. And since his contract buyout is nearly $13 million for the first three seasons, he'll likely get the chance to recruit his own players for his own system.

Will be an interesting situation to watch develop. We travel to Little Rock midway through the season. Should be a good time for a temperature check.
Hunker'd Down by Bernie at 9:14 AM

Retribution should be well received.

I'm too big of a cheapskate to pay full price for (most) movies. But after watching this trailer for Chris Conley's Star Wars film, I'd pay whatever he asked.


Retribution Trailer 1 from Retribution Movie on Vimeo.
Hunker'd Down by Bernie at 4:32 AM


My list of wants when it comes down to the SEC schedule discussion is pretty much in this order: preserve the WLOCP in Jax, as many trips to varied southeastern locales as possible, preserve the Deep South's Oldest Rivalry, and encouragement towards competitive out of conference games.

Overall, and like Mick says, you got what you need.

Eventually we'll get to the nine game slate. I agree with Saban that this is what's best for the conference. And like Tyler states, a nine game schedule means more frequent trips to places like College Station, Oxford and Baton Rouge. But it will also put Georgia and Florida into a corner in terms of the historic neutral field battle on the St. Johns while balancing the home slate every other year. That will make those of us that enjoy attending the WLOCP in Jacksonville a little nervous.

I'm not very practiced at the art of deception. But I want what I need. And I need what I want.
Hunker'd Down by Bernie at 8:04 AM