Off the chain. Already. 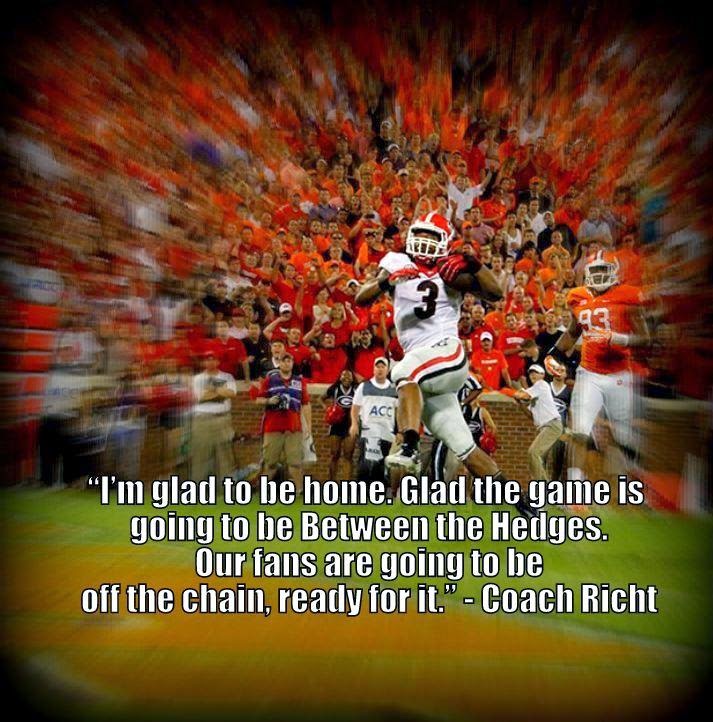 If you've been looking for some positive news from the Georgia secondary (and really, who hasn't?), Ramik Wilson has your antidote ready in speaking about freshman Dominick Sanders.

“He looks like the real deal out there,” Georgia linebacker Ramik Wilson said.
Both tailback and Todd Gurley and Wilson mentioned the Tucker High product when talking about newcomers who have impressed.
“He covers ground quick,” Wilson said. “He goes up and makes turnovers and that’s what we need. He’s going to push for somebody’s spot.”

They also gave mention to several other newcomers who have impressed early, including Malkom Parrish and Shattle Fenteng. It's just July and camp has yet to start. But we'll take it.
Hunker'd Down by Bernie at 10:30 AM

From Marc Weiszer. The highlights are he says he's lost about five pounds and then talks about the offensive line as well as Hutson Mason.

So BassinDawg started it. Just thought I'd add some possibilities before the head guy takes the podium today.

Pick em up and finish the drill in the comments.
Hunker'd Down by Bernie at 4:45 AM

Hutson Mason - under the radar (and microscope)

Weiszer asks the question that has been echoed over and over this week in Hoover. Murray, McCarron, Mettenberger, and Manziel are all gone. Ole Miss' Bo Wallace is the returning SEC quarterback with the most starts. Auburn's Nick Marshall starts the 2014 campaign with new bling. Mississippi State's Dak Prescott is a sexy mention in the conversation and, of course, Jeff Driskel has been reborn as the next great signal caller down in the swamp. As far as I can tell the one thing they have in common, other than landscape, is that they are all returning starters.

They also are on the ballot for preseason All-SEC. The other two on the list are Missouri's Maty Mauk and South Carolina's Dylan Thompson.

Hutson Mason is officially under the radar folks. And he's there despite having a higher passer rating than both Mauk and Thompson. He's there despite throwing for more yards per game than Marshall. And don't get me started on Arkansas' Brandon Allen and his 109 rating and 49% completion percentage.

Anyway, all of that is only meant to set the table. I doubt Mason is upset at any apparent snub. Preseason honors aren't even worth the words used to talk about them on air. What matters is the Saturdays this fall; tackle football starts in 45 days and that is when SEC quarterbacks either make history or go back to the sideline to send in the signals.

No, I just wanted to set the table for taking a closer look at Hutson Mason and what he can bring to the field in 2014. Some Georgia fans still don't think Mason will be the starter. The rest of us that are functioning in reality have questions about what to expect, even after seeing Mason close out the 2013 season.

I've got the last few games of the 2013 season in the queue and really would like to focus on what our fifth year senior quarterback has to offer. This afternoon I'll start with the Kentucky game and compile stats, thoughts, and some other mild-mannered analysis. Loosely what I'm looking for is pocket presence, tendencies, pace, where completions were and where incompletions were.

I've gone on record as saying that the Gator Bowl was not a fair measure of Mason's skills given the weather as well as Conley's injury. For a fifth year senior with so many weapons around him, we owe it to ourselves to look into what Mason can bring to the huddle.

Today in Hoover we get Lester, and we know he's always worth a laugh. But for today's chuckle I thought I would pass along this footage of Bret doing some HUNH his ownself.

At least he didn't ralph on the trooper's shoes. Or fling a blonde volleyball player in the ditch.

Email ThisBlogThis!Share to TwitterShare to FacebookShare to Pinterest
Dawg Tags: Hog...the other white meat, neither red nor black

They returned some of their allotment. So go do your thing Dawgs! (http://goo.gl/y8EANp) 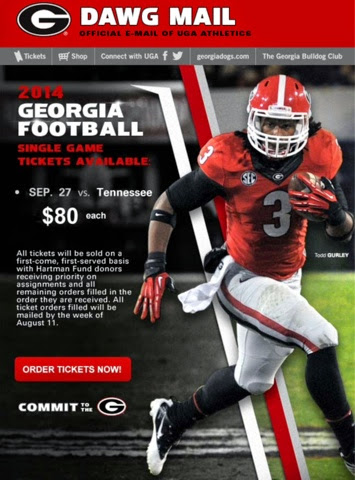 It came to my attention late yesterday that it was Brendan Douglas' birthday. On Sunday the family and I trucked on through Columbia and I shared some love with the "Gamecock Nation". Even as I typed that on my phone I recalled that it was a group effort in the backfield that last meeting in Athens, especially when it came to running out the clock late.

So, I hope Brendan had a great birthday. And here's to more chicken wing tackles and an exasperated Ol' Ball Coach pocketing that last timeout again on September 13th. Go Dawgs!

What else do you have to do today? (If you want to skip to the goal line stand and the subsequent clock draining, fast forward to about the 2:06:00 mark.)

Email ThisBlogThis!Share to TwitterShare to FacebookShare to Pinterest
Dawg Tags: as seen on YouTube, everything's cocky in Chickumbia, RB position

Season previews are a dime a dozen

And this one is pretty dead on until it trolls a bit at the end.

But I think it hits on some key points. At least ones that we'll look at much closer in the coming month and a half.

Although, I will always...ALWAYS...list the game in Jacksonville as the key to winning the East.
Hunker'd Down by Bernie at 4:53 AM