The McGarity theories, part one

First and foremost, two honest truths. One, I was excited when the guy was hired. A former student athlete that cut his teeth in an office that oversaw a couple national championship football teams...yes, please. But two, I don't like the guy. I think he's in over his head and I think he has a lot to learn.

You put those two together and my over-arching opinion is that Greg McGarity may be a good athletic director one day. Maybe even soon. But right now he's putting for par from 30+ feet.

Let's just rewind to Tuesday. That rumor of Mark Richt retiring wasn't simply a rumor. I give message boreds a hard time. But this wasn't just a post on a board that happened to gain significant traction. It was something much more than that. Otherwise Richt wouldn't have had to address it post-game. My thoughts (pure speculation, but honest to God feelings on the subject) are that if Georgia had lost the Belk Bowl, McGarity was ready to move. Hell, he may have been ready to move had Georgia won. But along the way, Richt, Lilly, Pruitt, and all of their charges embarrassed Louisville, who happened to have a former Georgia assistant coach. The feeling post-game was a definitive positive trend. Nick Chubb had become and even brighter national star.

And he was standing beside his coach.

In the end, on Tuesday, sometime between the tailgate and Nick Chubb raising the MVP trophy, the rumor (or whatever it was) fizzled. Hard.

What Mark Richt said after the game speaks volumes. "His" plan was to return. He had the privilege of being able to glance back at his freshman phenom running back as he did so, but Richt put to rest any question of where his feelings were. Mark Richt is many things, the most of which is the epitome of integrity. He's not one to recruit a kid to his school (don't forget, many of which were actively packing for Athens this week) only to back out suddenly and unexpectedly. And that's not even taking into consideration all of the guys that were currently on the roster.

Yesterday was a big day. As I sobered up and all of the happenings from Tuesday sunk in, I felt the state of the program was truly in flux. It really seemed a power play was in the balance. I wouldn't have been surprised if Richt, despite everything I mentioned above, up and left Butts-Mehre. Sure, he loves those kids, but he also is not one to fight it out with power hungry weasels. And he wants what is best for the program, his coaches, their families. I don't think that was being given as freely as he would've preferred.

So we received a positive sign yesterday. The truth is UGA needs to spend more on its football program. It needs to pay its assistants more and it needs to show a commitment to doing what it takes to win. The message from the Athletic Director yesterday was one of change. A renewed commitment to competing with the almighty dollar. A show of faith in the men who have put their blood, sweat  and tears into the program.

I honestly don't know where we'll be a month from now. There's still so much to play out. The new strength and conditioning coach has a staff to hire. Richt has offensive coordinator candidates to interview. The recruiting coordinator is packing for Fort Collins. So there is much to iron out. But yesterday, both AD McGarity and Coach Richt, together, sent a message that there is a collective investment in the future of Georgia football.

And I am most definitely listening.
Hunker'd Down by Bernie at 5:20 AM

So, you almost finish a post on the rift between the football coaches and their athletic administration (as well as possible ramifications) and suddenly news breaks that said AD has sent letter to big donors and assured them that Richt will get an extension and the program will have the full support of the administration going forward.

Life of a blogger. I'll adapt it to reflect the more current situation and post later this weekend. Until then, Weiszer can catch you up on the details.
Hunker'd Down by Bernie at 5:54 PM


Ronnie Letson, UGA director of player personnel the past year, has been hired by Mike Bobo to be Colorado State QB coach.
— Seth Emerson (@SethEmerson) January 2, 2015

Hopefully Letson's is the only other position Richt has to hire for in the coming weeks. However if the divide between coaches and admin is truly a problem, there's just no telling. It's an important time for this football program. Could be an interesting month.

Back to Letson, he hasn't been in Athens long, but has proven to be a tremendous asset in Georgia's new and improved recruiting philosophy. Many may gloss over this news today, but replacing Letson is as important as the other hires Richt is mulling over today.

Oregon quacks "No means no"

Rose Bowl got ugly late. Most of the FSU players had forgotten that when you lose you shake hands. Then the Ducks fired one more shot at Jameis.

Gonna keep it very brief actually. Because sobering and sleeping is needed for I-85 south.

- Chubb did many Chubb things.
- Grantham did many Grantham things.
- Charlotte was very nice. But has a ways to go to be SEC ready.
- Glad Mason was available after the game. Sad he didn't get to close that one out.
- Saying that I'm proud of the seniors going out with a win is not nearly enough. But I'll still say it. Very, very proud of those guys.
- And glad the team as a whole rose above the distractions of the last couple weeks.

Most of all, glad the rumors of Richt stepping down weren't true.

Me, in ACC ville.

They open their parking lots late. They don't like jay walkers. They don't have fast linebackers. 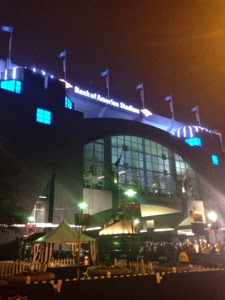 Hunker'd Down by Bernie at 6:25 PM No comments:

As I pack for Charlotte, (actually, while the family and I help fee the local homeless today) here's some predictions for Tuesday evening. Not sure I'll have much more before the game as things are pretty busy right up til kickoff, so please add to this in the comments.

Otherwise, it's really just a means to an end.