This was unfortunate. I believe the sports staff at ABH is above that. Not sure who was responsible for the "slideshow news story", but it made my skin crawl. Especially when I got to Ray Drew's picture. Talk about a guy that is all Georgia and doesn't deserve any bad press. And TJ Stripling? I was there in Boulder and watched him crumble like a six foot six inch twig right before my eyes when he was injured. 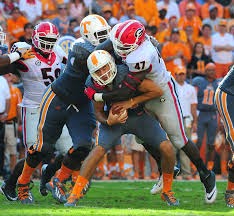 On one hand, sure, those players may not have lived up to the hype that surrounded them a few years ago. But, who's fault is that? In some cases it's the players. Especially the ones that shoot themselves in the foot. But mostly it's the fans and the media.

In many ways, I didn't live up to my collegiate potential. There are some parents and some professors and former UGA advisors that would wholeheartedly agree with that last sentence. But I finished it out and didn't have the displeasure of getting my picture in the local paper as part of a dishonorable slideshow.

Speaking of Ray Drew. Saw him standing outside Stegeman after the Lady Dogs' win against Vandy a couple weeks ago. He was talking to a couple of ladies, and smiling as usual. As we approached I told my daughters who he was. My youngest, perhaps misguided by the fact that he didn't seem as tall from a distance as he stood on the street and we approached on the sidewalk, said, "No it's not." As we passed I said "Best of luck Ray. And thanks!" He smiled wider and offered his appreciation.

I love that guy. The sky's the limit for him and I can see him making UGA nothing but proud in the years to come.
Hunker'd Down by Bernie at 8:35 AM