Yes, this award has been irrelevant since 1980 when Herschel should've won the first of three Heisman Trophys that he outright earned. But, it's July and we have to talk about something. Right?

Chances are at places like Betfair sports site, outside of Dak Prescott, the 2015 Heisman hopefuls will reside somewhere other than in the SEC. He's the only established quarterback in the conference and the Heisman inner circle has only awarded the trophy to one non-QB since Y2K was considered a serious cyber threat. But for our purposes here we're obligated to look at more possibilities than one, so here's my way too early ranking.

1. Dak Prescott. The Mississippi State quarterback was on many lists last season, mainly due to almost becoming a 3000 yard passer and 1000 yard rusher. This season he'll be a senior and will face a schedule that may favor him. Early game against LSU at home could vault him into early discussion while national television audiences in early November (definitely on a Thursday night matchup in Columbia MO, and potentially at home the following week against Alabama) could sustain his drive towards New York in early December.

As I said at the outset, the main thing going for Prescott is that he's a quarterback. But add in a vested interest in an SEC West run and performing in front of more and more NFL scouts and this could mean a big season for the slinger from Starkville.

2. Jeremy Johnson. The presumed starting quarterback at Auburn allegedly out-performed Nick Marshall in practices last season. If that is actually true then Malzahn will give Johnson plenty of chances to shine bright enough this fall in a system that will emphasize quick passes to gain large chunks of yards after the catch as well as fleet feet to gain tough yards when the defense is of balance. That puts a lot on pressure on Johnson's shoulders, but he's no kid after spot duty here and there for two seasons in Marshall's shadow.

Auburn will be one of the main contenders in the West. Johnson will have plenty of chances to grab some Heisman national spotlight with an opener in the Georgia Dome against Louisville, a tough early test in Baton Rouge in week three, then late in the season in Athens and at home against Bama. 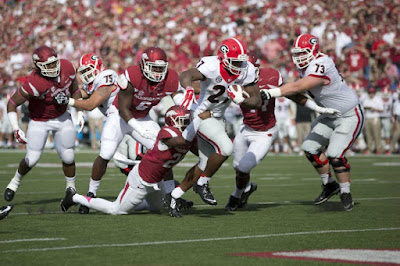 3. Nick Chubb. We've all been thinking it, so we might as well say it out loud, "As Chubb goes, so does Georgia's season." An offense that is still trying to find a quarterback and is under the leadership of a new headset will rely heavily on the sophomore's legs. That will especially be true early on while the new quarterback gets some experience and throws under his belt. And the schedule sets up to allow for that, at least until South  Carolina comes to town. A big showing against the Gamecocks and a couple weeks later in front of another (presumed) national tv audience against Alabama could put Chubb in early Heisman discussion. But it will be late tests in Jacksonville and against Auburn that decide whether the team has done well enough to keep its star tailback in it.

4. Leonard Fournette. Despite serving as part of a committee Fournette eclipsed 1000 yards last season as a freshman. Which is why many think he could be on the verge of a breakout season in 2015. He's a big back that can carry the load, but like Nick Chubb, his Heisman campaign will rely heavily on a quarterback to keep the safeties honest and a team that helps put together a good season.

5. Josh Robinson. For this last spot you'd probably prefer a quarterback given recent voting history. But there's isn't another that you could even list as a very darkhorse. And many others would probably put a Crimson Tide tailback like Derrick Henry here. But I'm going with Robinson based on experience and numbers. If that MSU offense can churn out yards then their star tailback is going to be a large part of that. The question is if Robinson can steal enough of the spotlight from his quarterback to steal enough votes.

It's going to take a special season for a running back to win the Heisman, something that last happened in 2009 when Mark Ingram became the first Alabama player to ever take home the trophy. It's just an era when quarterbacks are the hot commodity. Can Prescott bring the trophy back to the SEC? Can someone like Chubb or Fournette break the "QB streak"?
Hunker'd Down by Bernie at 5:55 AM