Those weren't the last words I ever heard Mr. Mac say to me, but they were perhaps the most meaningful. Most educators will freely admit that they, at least partially, go into the field for those precious two months in the summer. If you meet one that says otherwise, they're either lying or fresh out of college. Probably both. But I feel comfortable speaking for those of us who are also very dedicated to making young lives better equipped for their future, that our hearts are anchored in our career.

And if you were to condense his (estimated) five foot nine, three hundred pound frame into one thought, that was Mr. Mac. I was saddened with the news of his passing earlier this month. So glad he had 77 years on this Earth to enrich the lives of everyone that came within his orbit.

My two most vivid memories of Mr. Mac are bookends to my high school career. As a freshman at Cedar Shoals someone broke into the locker room. While Coach Scott blew his whistle and as we expertly performed fitness drills in the gym, the thieves made off with some misdemeanor type valuables. I lost a grand total of five dollars and a belt. It was traumatic. Guess that new Yes album would have to wait. 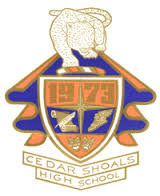 The next day I was called into the principal's office. Even though my dad had told me Mr. Mac was the gentlest of giants, I was petrified. The principal's office? I hadn't done anything, but obviously I was at fault for something. I remember sitting there in the chair across from his desk, waiting for whatever punishment it was I was there for to present itself. "I hadn't done anything!", I continued to scream inside my head. I'm sure y'all remember how the teenage mind can relentlessly torture its host in every way imaginable. And my imagination was in overdrive.

Mr. Mac finally walked in and introduced himself. "You're Dr. B's son right?" Immediately I was struck by his kindness. He came across as the most down to Earth school principal I'd known in all my years of formative education. Then again, he also seemed as big as the Earth itself. In the end, I had no idea how true that thought was.

The rest of conversation was lost in a blur of a heightened heart rate and the type of nervousness only a teenage boy of fourteen who is not wearing nearly enough anti-perspirant can understand. After a few moments he reached deep into his back pocket and pulled out his wallet, grabbed a five dollar bill, and handed it to me as he stood up.

He then smiled as I took the bill from his large hand. "I'm sorry my belt won't fit you." He winked as he said it, just to make sure I was completely at ease. I'm sure I thanked him in some awkward manner. And I hope some measure of sincerity was transmitted.

Today's Ingredients
- My dad told me that one March, Mr. Mac showed him a stack of papers bound together. Each one represented a home visit he made for a CSHS student who was in trouble of some sort. Here's a fund set up to continue such efforts for the Cedar Shoals community in his name, if you're so inclined.
- Hope you caught our tailgate roundtable. If not, here they are in order of appearance: quarterbacks, center, receivers, defensive standout, Coach Pruitt, schedule, and overall feelings.
- August isn't even here yet and Tyler is already looking at some cupcakes in November. I see his overall point, but Georgia Southern stands above the rest of those he clumps together. They've taken down Florida and gone toe to toe with Bama in Tuscaloosa.
- They also came as close if not closer than the Dawgs at taking the "State Champs" stamp off of Tech's shiny new 2014 rings.
- Speaking of the engiNerds, the AJC may have missed the latest chapter in Reuben Houston drug story, but Blutarsky didn't.
- And speaking of non-conference scheduling, G&B Attack looks at the Gamecocks' future slate.
- MaconDawg has a look at Coach Richt's new 2017 commit, DeeJay Dallas.
- "So many people." Weiszer writes about the spectacle Dawg Night has grown into.
- Over at Field Street Forum there's a challenge that, should you choose to accept it, could drop a lucrative prize into your lap. (No, not Bama in Sanford tickets. I'm talking about "BRAGGING RIGHTS" son!)
- I'm as much a sucker for a sucker punch at Coach Nicky as the next guy.
- Jason Isbell is a master at lyrics. Here are some words regarding the new album that I found rather astute.

Both literally and figuratively, I was ready to put Trigonometry in the rear view mirror. It was the last exam that stood between me and life beyond the last 12 years of formal education; one final hurdle before I cranked up my 1967 Malibu Chevelle and conquered the world.

I resisted the temptation to speed through the parking lot. As the rest of the underclassmen finished their last day of school, I was heading home mid-morning, with nothing to do but go back to sleep...after setting an alarm that would allow me to (possibly) brush my hair, (potentially) brush my teeth, walk across the stage, and accept my ticket to adulthood.

Yes, every ounce of me wanted to punch the gas and crank Telegraph Road one last time as I peeled onto Cedar Shoals Drive. But I was also compelled to savor the moment. And I was glad I chose the latter.

At the end of the one way conduit from the student parking lot to the front drive beside the school sat a metal chair doing its best to contain a man better suited for a La-Z-Boy. Even as a soon to be graduate, I wasn't one that was familiar with the ins and outs of leaving campus before the final bell. While I wait for you to stop laughing I'll simply add that based on my limited experience there was a 50-50 shot of getting the security officer as opposed to clear passage. I'll also add that the seniors had been reminded (repeatedly) that if we intended to leave campus early we were to bring a note from home.

Suddenly I was that awkward 14 year old again - overly excited and equally amazed by my principal's ability to relate. He moved his steel chair from the middle of the lane to the side so that I could pass and gave me a wink.

It was the same wink Doug McLaughlin gave me later that evening when I crossed the stage at Stegeman Coliseum and received my diploma. My formative education was done. That one wink, just as his incredibly firm handshake and every single slap on the shoulder he gave me and thousands of other students that passed him in the hall on the way to their next class, told me that what was waiting for me tomorrow was greater than anything I could leave behind in a trail of gas fumes and a Mark Knopfler solo.

Mr. Mac always had the bigger picture. I'm proud to have shared a few frames in it.