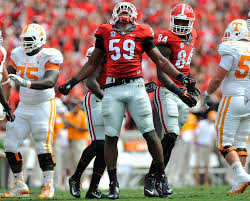 Day four also tackles some shoes that need to be filled. This time from the other side...

Similarly, on the defensive side of the ball a lot of tackles need to be replaced now that Ramik Wilson and Amarlo Herrera are gone. Who do you see stepping up to drag opposing ball carriers down?

Robert - Jordan Jenkins, Lorenzo Carter, and Leonard Floyd are all studs.  They can all throw opposing ball carriers around like rag dolls.

BDB - Hearing great things about Thompson already. Don't think he stacks up a bunch of tackles in the stat line, but if he can plug the middle the way we need then those guys behind and around him stand to gain from the fruits of his labor.
Hunker'd Down by Bernie at 6:16 AM