Staying on the defensive side of the ball, today we talk about what Pruitt's defense might be able to build upon in his second year in Athens.


Defensive coordinator Jeremy Pruitt is quite popular among both fans, players, and recruits. Does the defense's struggles against the run last season concern you? Do you anticipate improvement in that area in 2015? 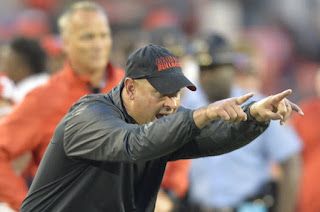 AHD - Pruitt had his hands full straightening out a young and thin secondary. We were middle of the pack performance wise in the SEC against the run. We've added some talent and it will show on the field. We had our moments in 2014. Held the Barners to 7 points, shut the Zoo out and Arky couldn't push us around on that front line. We will be better.

Robert - Not being able to stop the run against Florida and Georgia Tech was especially troubling, but I do see improvement.  I would be surprised if we didn’t see Pruitt’s defense improve across the board.  Grantham wasn’t the best recruiter or evaluator of talent.  Pruitt is starting to get some of “his guys”.  I am particularly interested to see Trenton Thompson and how quickly he makes an impact.  All reports are he is a beast, and him clogging holes along the defensive line should aid the rush defense.

BDB - I see nothing but improvement too. Given his propensity to connect with recruits, and his knack for downright coaching, I think we've only just begun to see what Coach Jeremy Pruitt can do. In fact, we may be a year away from truly seeing the results of all his efforts. But if a couple things click, look out in 2015!
Hunker'd Down by Bernie at 9:44 AM