I asked Robert and AthensHomerDawg some questions. We'll feature one a day and today we start under center.

Let's start this series off with the million dollar question(s) - Who starts at quarterback against Louisiana-Monroe, why, and will he (barring injury) be the starter the whole season? 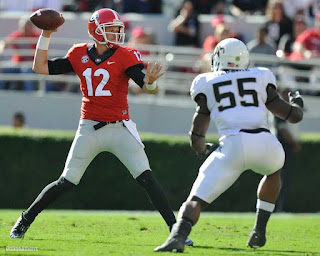 AHD - Ramsey seems to get the most love. He certainly has gotten more game reps. I thought Bauta had the better spring game (for what that is worth). He went through his progressions well and looked pretty smooth all in all. Park is gone. Was surprised he didn't get more reps in the spring. He was a great scout team qb from what I heard. He's gone now. I don't expect to see the new qb playing.............I believe his transfer was more about depth than any perceived lack of talent already here.

Robert - You asked me this question a few months ago, and I said Jacob Park.  I guess I will take another shot at it.  First of all, I am not buying for one second that we were just looking at other quarterbacks because of numbers.  They didn’t consider Everett Golson and bring in Greyson Lambert just to get numbers.  They brought them in because they aren’t satisfied with what they have seen from the candidates that were already on campus.  It may be lack of preparation, lack of work ethic, lack of size, or lack of arm strength, but for one reason or another the coaches aren’t feeling comfortable about this position going into fall camp.  I do not think it will be Faton Bauta, despite his knowledge of the offense.  I do not think it will be Greyson Lambert early, because he hasn’t been here learning the system.  By default, I have to say Brice Ramsey against Louisiana-Monroe.  All three quarterbacks will probably see the field in that game.
I do not see this being a typical Richt team, where the back-up quarterback only gets in once the game is out of hand.  I think Ramsey and Lambert will battle for this position in the early going before they settle in on a starter.  It will be decided early though.  Whomever plays the most against the Gamecocks will be the starter.        This is the million dollar question though.  As much as we would love to see Chubb get the ball for 60 carries per game, it will not be successful.  They will have to have balance on offense and keep the defense guessing.  If we do not have a capable quarterback to do that, it will be a long year.

BDB - Okay, good stuff guys. As far as the Lambert transfer, I'll split the difference. It's going to be nice to have the extra arm in practice, especially after Park shied away from the competition. But I do think Schotty wanted more options to look at in August. I agree that Lambert won't likely start the first game. However, I could see him being the eventual starter though if Bauta isn't able to stay ahead of Ramsey and Ramsey starts to force some throws.

In the end, I'm still in favor of Bauta because I think he adds some versatility to the huddle and some unique athleticism to the backfield. But I wouldn't be disappointed at all if Ramsey showed up at camp and pulled ahead and started 2015 where he ended 2014...under center.
Hunker'd Down by Bernie at 6:11 AM