Hopefully you've already heard the news, both Richard Seymour and Rex Robinson are this year's UGA inductees into the GA-fla Hall of Fame. (h/t Gayle) The ceremony will be October 30th, leading up to the annual rivalry on the St. Johns. As the game between the Dawgs and the gators is historically recognized as one of College Football's greatest games each year, I'm sure both Richard and Rex are especially proud to be honored in this way. 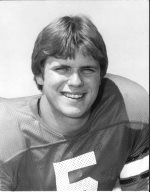 And as he's been a friend of the blog in the past, I'd like to especially congratulate Rex. When this little blog was going through its teenage years and I was having trouble grasping some place kicking concepts, Rex was gracious enough to not only respond to my email, but suggest I call him for a better explanation. A half-hour or so on the phone with a Georgia legend was a humbling experience. Like, did you know Erk Russell recruited him out of high school? Or that Rex once tackled Herschel in practice, stripped the ball loose and ran it back for a touchdown?

Ok, I embellished that last one a little. But mostly what I took away was that Rex bleeds for his Dawgs. He loves everything about Georgia, especially his former teammates and fellow lettermen. He's both a knowledgeable historian in Georgia Bulldog history and also keeps current on what's going on in Athens and around campus. All in all, a Damn Good Dawg!

But he also has a deep passion for kicking. And he appreciates all kickers, from those pimply faced kids first learning the mechanics and techniques to the guys getting paid on Sundays. (And dare I say even some that may wear orange!) Rex can connect to what they're doing right and wrong, what they're thinking and what they're going through before and after the ball leaves the tee.

In short, Rex is one of the great guys that remembers where he came from and is a great person to talk to about some of his passions, like Georgia football and kicking. Which is why it's so great to see #5 honored this way.

Much deserved kudos and a well-earned fistbump sir! GATA!
Hunker'd Down by Bernie at 3:55 PM