Greyson Lambert probably hasn't even finished unpacking his boxes. And yet, the former Virginia Cavalier is the new starter for the Georgia Bulldogs.

Much has been made about Lambert finishing the spring in Charlottesville as the backup. Even more has been made of his stats - 10 touchdowns to 11 interceptions. I bet if I had the chance to ask Lambert about those two numbers he'd own them. But the truth is Charlottesville is not Athens. There's better coaches and much better talent in Athens. 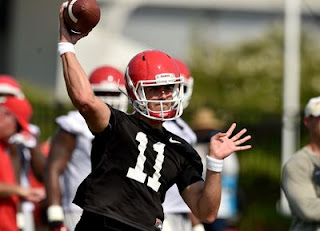 So for my analysis, I'm doing just what Richt and Schottenheimer did when Lambert decided to transfer and throwing what the guy did last year out the window.

I'm not going to say last evening's news shocked me. For the last week the idea of Lambert edging out Bauta and Ramsey had gained plenty of traction. But for nearly a month I had just resigned this QB race to playing itself out in the first couple games.

That being said, naming the Virginia transfer the starter before the opening game was a little shocking. And it posed a lot of questions in my head.

Namely, what does that say about our recruiting at the position the last few years that a guy can step onto campus and a few weeks later is atop the depth chart? One thing is abundantly clear - Brice Ramsey may have finished the season as the man, but he is not Schottenheimer's man. Coach Bobo leaving for Fort Collins impacted Ramsey's grasp on the position.

There's also been a lot made about Ramsey never taking the reins off the field either. However, Richt has made comments about the quarterback's improved work ethic and ability to lead. In the end it wasn't enough to hold off Lambert.

Faton Bauta on the other hand, at least according to his teammates, out-works everybody. He's been considered a longshot to win the job though mostly due to his counterparts' ability to stretch the field with their arms. Even before Lambert transferred, it was clear that although Bauta had the overall skills and mindset, both Jacob Park and Ramsey had the stronger arms.

So it appears in Lambert both Schottenheimer and Richt have something that could be considered the best of both - a strong arm, experience, and a readiness to work at getting better. That's why I found DJ Shockley's tweet last night quite insightful:

Lambert has the intangibles on the field that separated him in this race in my opinion! Demeanor/attitude go along way for a QB!!!
— DjShockley (@DjShockley3) August 31, 2015

All that aside, it's still a race. As I've mentioned before, even going up against Louisiana Monroe is a bigger test than a scrimmage. Both Bauta and Ramsey have played in front of 92,000. I think I can speak for all us when I type that we're anxious to see how Greyson Lambert does on Saturday in fornt of that many "expert quarterback coaches" like myself.
Hunker'd Down by Bernie at 5:00 AM