He's setting records, dating the soon-to-be Miss Georgia, and running the offense at his preferred pace.

“We’re trying to go at breakneck speed, as fast as we can,” Lambert said. “As the knowledge progresses and we get a little more comfortable each and every week with the offense, the faster we can go and make our calls. Hopefully we’ll be going faster every week.” 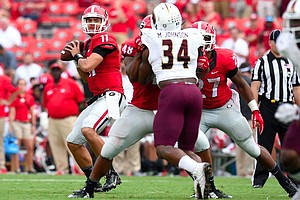 This week, Lambert said the offense was executing its high-tempo package in practice to the point where time would be left over during certain periods of team drills. If the offense gets through a set number of plays within a given time frame, it gets a break before the next period of practice begins.

And when you look at Lambert's numbers last season as compared to three games in this season, it's like one of those DirectTV commercials.

Long way to go, but I would imagine Lambert is going through something of what Georgia fans felt like that week in January 2014 when Grantham was bought from us and Pruitt landed in our lap.

An offensive coordinator that knows what he's doing, an offensive line that actually blocks, and a stable of talent around him. Go play the Powerball Greyson. Assuming the NCAA will let you.
Hunker'd Down by Bernie at 7:29 AM