Reading this long piece on the tradition of cheating within the New England Patriots organization reminded me that our new offensive coordinator has crossed paths with the head coach behind Spygate and Deflategate - Bill Belichick.

Of course, the Patriots are most known for stealing (or at least going to great lengths in attempting to steal) defensive signals. But it reminded me that one change on the sideline Saturday was seeing FOUR guys sending in signals to Lambert and Ramsey. I'm sure you saw them too because they were wearing neon yellow hats and armbands. Here's a picture from Radi Nabulsi's gallery: 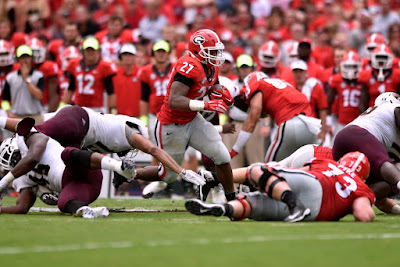 I'm not sure which of them sent the actual signal in and which of them had the dummy signals, but this is right after they said to hand the ball to 27.

Anyway, I hate pro sports as much as the next guy. But read that piece on the Patriots. It's like a soap opera with all the spurned alliances and covert undermining of authority. But without the makeout scenes.