That’s how many are describing the offensive (and defensive for that matter, which we’ll get to next) performance Saturday. For those who use those descriptions in a critical manner, I’m not really sure what they were expecting to see.

Afforded the opportunity to rewatch the play selection, line blocking, running backs’ decision, downfield blocking, and of course the quarterback play, I was looking mostly for fine details to mention and discuss. Every running play was virtually the same. And passing downs, what few there were, evolved as an exercise in caution.

But there was a lot that can be gleaned regardless. Let’s start with the line of scrimmage.

The offensive line didn’t come out of the gate with bad intentions. But Sale’s group dominated ULM’s front overall. The only concern I saw was when we moved Kublanow over to guard. He may have had a costly penalty for a chop block (I believe), but the line was better with him at center for sure. Pass protection was good. The couple times Lambert was rushed was more due to downfield coverage. And the lanes Chubb, Michel, and Marshall had were reminiscent of last season against Auburn and Louisville.

I’d forgotten how nice it is to have an experienced returning offensive line to start the season.

The running backs were as advertised of course. There really wasn’t much of a surprise here. The only exception might be that we were treated to what it looks like to have three healthy backs that would probably be starters for most other teams. Marshall ran with confidence and the kind of power we may have forgotten he had. His first touchdown wasn’t due to blocking as much as his sheer determination to get in the endzone. And Michel showed plenty of power between the tackles too, moving the pile forward a few times for extra yards. 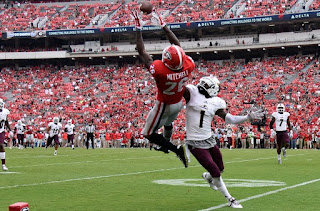 The only disappointment may have been not getting Turman in the game before it was called. Oh well.

It might be easy to gloss over the receivers as they did not get much in the way of stats. But the truth is they got plenty of work. Mitchell was putting on a clinic blocking, and both he and Blazevich made great catches for scores. Godwin showed us how his speed and athleticism can lead to separation from defenders. He’s going to be fun to watch develop once he’s out of the doghouse for that non-fumble.

Ok, the quarterbacks. Again, to me it was clear why he was named the starter as he just looked more poised. But the main thing is the offense was just better with him out there. You’re probably pointing to the one drive Ramsey had, and you’re right. Not much to go on and Bauta didn’t even get in the game.

But, I saw something Lambert did that Ramsey didn’t, and that was change the play at the line of scrimmage. We were running so many times between the tackles that it was repeatedly an easy call for ULM to blitz up the middle. Lambert looked like he audibled into a better run on Chubb’s second score; Ramsey should have done the same on the sack he took. There were just too many defenders for the center and Keith Marshall to contain.

As I said Sunday, I hesitate to put too much on this one (almost complete) game. But there was enough there to go on, with Lambert’s day in particular, to frame what we might see going forward. And that’s that Lambert has taken better overall control of the offense. Just as I was pleased to see Ramsey make a great touch pass to Michel on the screen, I was even more pleased to see Lambert throw the ball where defenders had minimal (if any at all) chance of putting a hand on it.

Just as it will for the season, the running game set the tone Saturday. Eventually we’ll have a game where the passing game will need to win one for us. Nothing I saw from this “vanilla” version of Schottenheimer’s first game leads me to feel uncomfortable about where this offense is heading.

Here's hoping we get to see all three quarterbacks in Nashville.
Hunker'd Down by Bernie at 11:40 AM