So after each game I enjoy rewatching the televised version. From our seats it’s easy to pick out safety and cornerback play. Watching the game on television it’s easier to see how the offensive and defensive lines performed. So both give a great overall picture of what was good, bad, and ugly. And after rewatching the opener against the Warhawks I decided there was enough that I missed in my initial thoughts to break this up into a post on the offense, one on the defense, and one on the special teams. Let’s start with the latter.

I’ll refrain from continuing to gush over Collin Barber. But you have to be excited about what you saw from his punting - four punts for a 43.75 average, no returns, with two punts that were beautifully angled coffin corners. And the kickoffs! Barber kicked off a total of six times and four were touchbacks. Morgan’s season average last year for touchbacks was 31%.

Because it wasn’t just Barber of course. Two blocked punts is all you need to see to realize the renewed enthusiasm for special teams. You can hear it in Richt’s statements as well to affirm that this phase of the game is being given its due attention. 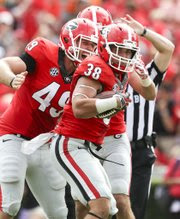 Ryne Rankin was a force on kick/punt coverage. Lorenzo Carter and D’Andre Walker were rushing the punter with a focused intensity on beating the snap to the punter’s hands. Seeing it both live and on the rewatch confirmed how much we were dead set on attacking their wide splits in punt formation. When they squibbed the kickoff, our “up men” weren’t baffled. Keith Marshall sprinted ahead of Reggie Davis to make a key block on a kick return that lead to another 6-7 yards.

A lot of that points to an increase in team speed, especially when you consider in years past we wouldn’t have dreamed of using the likes of Leonard Floyd on punt teams. And team speed is better overall this year. You could see that in all phases of the game.

Maybe some of that was the opponent, sure. But there’s more attention to detail in special teams. The sideline is paying greater attention to what’s going on during fourth down plays now and not just going through the motions. Coach Ekeler body bumped Rankin so hard after a special teams tackle that Rankin tumbled to the ground.

About the only thing we didn’t see was Isaiah McKenzie on punt return. Some have made a big deal of that, mostly because he did run some routes on offense. I would suspect this was just precautionary and we’ll see more of him juking and jiving his way through a punt return sooner rather than later.

Overall I'd have to give special teams an A for Saturday. It was an easy grade to give. And almost as much of a delight as watching it play out before my eyes.
Hunker'd Down by Bernie at 11:21 AM