I know. I’m just not there yet with a Richt reflective piece. Gonna need a little more time to get it right. The man deserves that much.

For now, let’s delve into the rumor. Prevailing thought is that a deal is imminent with Kirby Smart to succeed Mark Richt as the head football coach at the University of Georgia. There’s some factors that make this more than just message bored fodder, namely the South Carolina coaching search.

Tom Herman (former Ohio State offensive coordinator and now the head coach at Houston) backed off of the Gamecocks’ overtures (as well as some others I would imagine) a couple weeks ago and that’s when AD Ray Tanner made a push for Smart. From what I’ve read, things progressed quickly, but naturally the Alabama defensive coordinator and UGA alum wanted to see what would happen in Athens before making a decision. 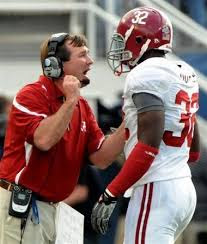 And it appears as if Athens was more than ready to open up backdoor communications.

From there we get that certain coaches like McClendon, Brown and Rocker are being retained and Smart is bringing specific coordinators with him. Muschamp has been mentioned as the potential defensive coordinator and I’ve read where Clay Helton (USC interim head coach)*, Bill Napier (Tide receivers coach) and several others as the possible offensive coordinator.

(At this point I don’t put much credence into assistant rumors. I only mention it as I’m sure a big factor in a coach like Smart’s decision to take his first head gig would be who he could retain and who he could bring with him. Given the recent connections between the Alabama coaching tree and UGA, I would think there is a lot for Smart to sort through.)

Last night after the team meeting there was loud noise, mostly from the defensive players, to #keepPruitt. I doubt Muschamp’s hissy fit on the sideline (and the field, twice) during the Iron Bowl helped his case to “come back home”. But in my opinion, his track record of mediocrity in the SEC as a coordinator speaks even louder than his F-bombs. If Pruitt can be retained along with Rocker, it would be a big plus for me as we played a lot of young players on defense this year.

Anyway, the main point here is that if the Kirby Smart rumor is true it appears to be a counter-move to step in the way of South Carolina getting him instead of us. I’ll be honest, I’m intrigued by Smart. That would win the press conference for sure. What worries me is we have at least a week before any kind of announcement is made as Kirby is a little busy this week continuing as Saban’s minion.

A lot can happen in a week. And most of it is not good considering the traction the story will get. Traction leads to more and more questions which adds more and more pressure. That’s where a confident and poised administration steps in and seizes control.

Unfortunately, everything we saw and heard outside of Butts-Mehre last night speaks to the opposite of confident and poised. Therefore today’s press conference needs to restore order, at an absolute minimum.

*Helton has been promoted from interim to USC's new head coach
Hunker'd Down by Bernie at 8:22 AM