(due to time constraints, we join this episode of the Friday Misery already in progress…)

...and you can’t resist the temptation because you obviously live by the seat of your tired ass pants and have absolutely zero impulse control which means you’ll take any chance to stray from the task at hand which is to beat...

Who really gives a shit what the AJC thinks Coach Richt’s picture with his quote prized recruit unquote really means? Who cares a good gotdamn how many eggs he had in his omelette?

And you too, Mr. Guy with the Glass Half Full. I can do my own math. I can even add without my fingers. So yes, I know the possible win total for the season without even asking my 13 year old for any help carrying the one.

You’re all wishing away the season. Hell, some of you blew out the candles on it long ago. It’s going to be a night game in Sanford and all you care about is whether or not Richt shook some kid’s hand firm enough. You’ve got such a damn hard on for some teenage boy that you won’t even bother recognizing any of the ACTUAL GEORGIA RED BLEEDING SENIORS WHO HAVE GIVEN TIME AND EFFORT AND GUTS AND ACTUAL GOTDAMN LIMBS FOR THIS PROGRAM. I don’t give a shit about your ifs and buts candy and nuts. You know why? Because this time next year you’ll be aiming that bulge in your pants towards some other seventeen year old.

Jake Ganus stepped in with one more season of eligibility. His own school turned its back on him and he said “Fine, I’m going to Athens to tackle some other assholes in the wrong colored helmets. I’m going to play for Georgia where they want some damn players, and where they need some guys like me that have a big ol’ motor and a willingness to bring bad intentions once the ball is snapped.”

And he’s not the only one you’re turning your back on. Ganus isn’t the only DAMNGOODDAWG you’ve already forgotten as you log onto your message bored and plan out just how Coach [insert any name from the sublime to the ridiculous] is going to get your new quarterback SEC ready. No, you’ve also turned your back on Quayvon and Jordan Jenkins and John Theus and Kenny Towns and Sterling Bailey and Chris Mayes and James Deloach and Jay Rome and Hunter Long and Marshall Morgan and Josh Dawson and Devin Bowman and Collin Barber. You’ve forgotten all about guys like Malcolm Mitchell and Justin Scott-Wesley and Keith Marshall and Kolton Houston and what they’ve sacrificed to make this team better.*

I’m just tired of all the asshats and their thumbs that smell like poo. I’m tired of people forgetting the love of the game because they’re too butthurt over October to wear their colors through the highs and the lows. I’m just miserable at the thought of a DawgNation divided against its own team just because some “fans” are too simple-minded to give a shit about what matters. What really, really matters 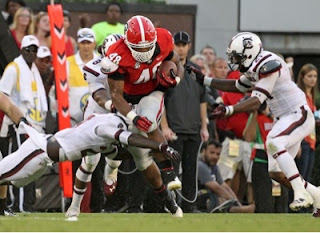 STAND UP DUMBASS WHEN YOU READ THIS!!!

Please bow your heads....Lord, thank you for Quayvon's Facemask, may it rest in peace, and all the other seniors on our roster. Please forgive our shortcomings and deliver unto us one more win in Sanford this season. Amen and Go Dawgs!