GEORGIA from Georgia Football on Vimeo. 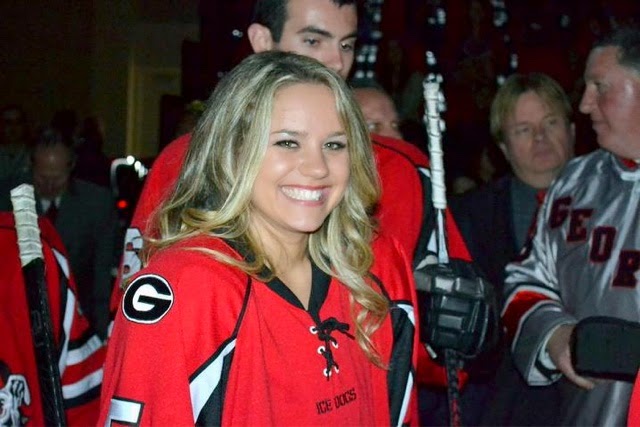 “She’s a really good player, a good skater,” said Gus Saponari, who also coached her on girls select teams. “She’s a head’s-up player. If you keep your head up, you can avoid some big hits.”
And deliver them. In her Ice Dogs debut, Shelby gave a hip check to a Gator that announced her arrival.
“He went flying,” she recalled. “I didn’t see how big of a hit it was. I heard how big it was. The whole crowd went crazy.”

Hockey wasn't available for me as a sport back in my formative years. But if it were, and it offered a chance to play with badass girls AND a chance to hip check gators, well, I would've given it a shot.
Hunker'd Down by Bernie at 8:44 AM

If you "take" one thing away from recruiting coverage... 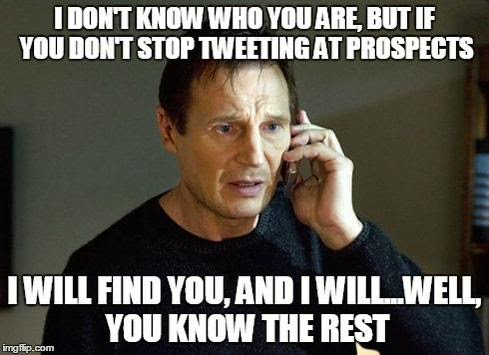 Have seen that tweet from Maryland Compliance making the rounds. It's funny and to the point. Most importantly, there's a lot of fans nationwide that could take a moment to let that sink in. Or, if you just can't respect the Terrapins' compliance office, try the immortal words of Roger Waters:

Recruiting trails are alive for #Fam15!

So begins the mad dash towards the February 4th faxing tournament!!

Of course, he was long considered to be just a three year player at Georgia. But he's the only draft eligible underclassman Richt has that is leaving early. As Weiszer reports, that's just one more from last season when no Bulldogs entered the NFL Draft pool, but it's still a stark contrast to recent years that saw many key players leave campus.

Thinking back, I always felt Leonard Floyd would leave after this past season. But shoulder surgery may have helped him decide to stay. Others that were possibilities - Malcolm Mitchell, John Theus, Jordan Jenkins, Justin Scott-Wesley, and Kolton Houston. Mitchell and JSW dealt with injuries and lots of games missed. And Houston is still progressing as an offensive lineman after emerging from Mark Emmert's purgatory before the 2013 season. So really, Theus and Jenkins were the only other possibilities to leave early who had played a lot this past season.

In Weiszer's piece, Richt argues that the importance of a college degree is often lost in the headlines this time of year. I wouldn't bet against that either, especially with someone like Jenkins who made a big deal out of applying to (and getting accepted into) the Terry College of Business back in August. Still, the lure of the NFL's early rounds and all that cash has to be tempting. Last May, 98 underclassmen threw their name in and 14 of them were selected in the first round. In fact, the first four picks were players who left eligibility on the table. From there it dropped off steadily until 45 of those underclassmen were left undrafted.

So to a player like Jenkins and Theus, that dropoff puts a lot of stock into their draft analysis they get back from the NFL. If they even requested it. Nationwide, the number of underclassmen requesting a draft grade went down dramatically.


The number of college underclassmen that have requested an evaluation from the NFL Draft Advisory Board is down a staggering 42 percent from last year, NFL Executive Vice President of Football Operations Troy Vincent revealed in a tweet Thursday. The precipitous drop likely stems from a change to NFL policy regarding the feedback system for underclassmen. NFL Media's Albert Breer noted the changes to the system in July, reporting that college football programs would be limited to requesting feedback on behalf of five underclassmen. Previously, there had been no limit to the number of underclassmen that could request a grade.Another potential reason for the big drop could be the cautionary tale from this year's draft. Of the record-setting 98 underclassmen that were granted eligibility for the 2014 NFL Draft, a whopping 45 went undrafted. That number prompted further calls from coaches and others for players to think long and hard before making the jump from college to the pro ranks as underclassmen.

Some fans get angry at players who leave early. I'll admit to being disappointed a time or two about a player's decision. But in the end it's not my place. This is often the moment they've worked very hard towards, and the decision to stay and study or leave and play full time is a personal one. So it's good to see these players are getting better feedback to make the best decision for themselves and their family. And not just blindly jumping at a possible cash grab.

I often make a list of off season topics to chew on sometime between now and August. Here's what I have so far.

That last one is pretty vague I know. But my thoughts are that while the media and fans point to Richt/Pruitt stealing personnel and ideas from Saban, what is actually taking place is a new and improved mission statement towards winning. The nearest model to emulate, by both association and proximity, is in Tuscaloosa.

I would suspect that even as early as GDay we will see that this phenomenon we refer to as The Pruitt Effect is just beginning to take root. So how soon will it truly bear fruit?
Hunker'd Down by Bernie at 8:22 AM

Realize I'm late to the party (been a bit busy trying to find the CFB Playoff consolation game on ESPN).

Georgia is in the process of lining up a neutral site nonconference football game in Atlanta in an upcoming season, athletic director Greg McGarity said on Monday night.
“I think that is something that will be in our future,” McGarity said on the “Bulldog Hotline” radio show. “I’m not sure how quickly. Maybe sooner than later. Those are all things that I think are good for our program to be in Atlanta. I think there’s definitely a good chance that’s going to happen sooner than later.”

How is it good for Georgia to play a game in Atlanta? You know, as opposed to 60 miles away...at home?

I know I've been hard on the ol' athletic director of late. With good reason. But we were just getting back around on speaking terms. There are men making a profession of coaching tackle football at Butts-Mehre that are getting paid commiserate to their peers now. We've come a long way since Bobo flew off into the sunset.

And now that weasel wants me to ride MARTA again? In August? To quibble with scalpers?

And then there's this:


"With the guarantee that goes along with those games," McGarity said, "you can more than make up what the revenue would be for missing a home game, at least for the institution."

Well. As long as the fat cats and dipshits get their cash, screw the hotels, motels, restaurants, stadium employees, liquor stores, Waffle Houses, local charcoal industry, not to mention the poor miserable bastards like me that just like to go spend a Saturday in Athens as opposed to Atlanta, elbow to elbow with hobos, freaks, corrupt councilpersons, and transplanted yankees from <University X>.

Email ThisBlogThis!Share to TwitterShare to FacebookShare to Pinterest
Dawg Tags: AD McGarity, as seen on YouTube, idiots not named Terence

If Chris Weinke is old, I must be ancient.

As Weiszer passes along, Mark Richt's past quarterback met what may be Mark Richt's future quarterback last month as Jacob Eason trained under Chris Weinke as part of the Under Armour Elite camp. The greeting went something like this:

Of course, Eason was a toddler at most back when Weinke was at FSU. Still, just another reminder that we're not as young as we used to be.
Hunker'd Down by Bernie at 7:50 AM