I first met him several years ago. Maybe as many as ten. Honestly, I don't remember. But I know it was before this here blog started puttering upstream along The Internet. And I know it was after my second stint through UGA, which puts the meeting somewhere between beating Arkansas for the first SECCG and that time we drank all the beer in Tempe.

Speaking of beer, I was in a bar downtown having one and this guy comes in like a runaway train. By that I mean his entrance was a chaotic event that miraculously evaded complete and utter catastrophe an incidental death. An action as simple as opening a door and entering a room instantly became a calamity of flailing arms and legs; glasses were tossed into the air creating various flight paths for the beer, whiskey, and margaritas they had previously contained; a seeing eye dog panicked while aiding in the transition of his owner from table to restroom; napkins and swizzle straws multiplied in mid-air like rabbits on a dewy April lawn; in the corner a jukebox abruptly stopped playing the second chorus of Layla; and a waitress lost all manner of control of her language just as the room became otherwise deafly silent.

"GODDAMNIT BEECHER! YOU CAN'T F***ING BARGE THROUGH THE MOTHERF***ING DOOR LIKE A GODDAMN HYENA!!"

She yelled this at the height of her tumult through the air having tripped over Beecher's leg (or maybe it was his arm) which had propelled the tray of drinks toward a large table of thirsty patrons. After making sure the seeing eye dog didn't leave his owner abandoned and then helping the waitress to her feet, I offered a hand to pull this rangy, awkward stranger up from the floor.

"Thanks mister. At least I didn't spill beer in Rowena's hair this time. That really pisses her off."

"Not a problem. Let me get you a cold one. Looks like you could use a moment of stationary rehydration."

As he drank from the frosted mug, I marveled at how strangely tall Beech was. If he was six feet and a half, roughly 74 inches of that were his legs. Which might explain where all the beer went if just one of those legs were hollow.

We sat and chewed the fat for what seemed the whole afternoon, all the way through Happy Hour. Then moved from the bar to a corner booth where Rowena took our dinner order, surprisingly, without a single f-bomb. Somehow, in some way, Beecher had been forgiven for causing what surely amounted to six unhappy customers, $50 of broken barware, two and half tables of soggy pub food, and a black lab with post-traumatic stress disorder.

And that's how I met Beecher O'Callaghan.

Today's Ingredients
- Supposedly, there's like just over 200 days left until college football in Sanford begins again. Nothing is more miserable than this cold, melancholy, heartless winter we refer to as The Offseason.
- Personally, I've been biding time Raylan up in Harlan County. And also with Tuco and Mike and some skater dudes, as well as the world's best lawyer. The only one that can argue an executioner down from the death penalty to six months of rehab. Saul Goodman.

- And hey! The Hoop Dawgs are doing swell! Just in time for a visit from Bruce Pearl and those Auburn whateveryoumaycallits.
- And baseball starts this weekend! The Diamond Dawgs take the field in the shadow of a newly renovated Foley Field against the Eastern Illinois Panthers. PING!!
- From the Lies and other Sexy Half-Truths file, Blutarsky finds new Atlanta Falcons linebackers coach Dan Ulbrich still on the UCLA recruiting trail.
- Over at The Lady Sportswriter, Kimberley wonders if the Terry College of Business could swing Roquan Smith's decision in UGA's favor.
- Congrats to Marc Weiszer of the ABH on getting some recognition for his hard work. (h/t Emerson)
- At Dawn of the Dawg, Michael Collins asks a popular question - Is Georgia football underachieving or just unlucky?
- Assuming a competent SEC officiating crew (ahem!. Ok, I'll wait for the laughter to stop....)...Greg Poole sees where the new rule for linemen being downfield would've changed the outlook of the 2013 Auburn-Bama game.
- Lastly, stay cute Rutgers.

If you're a fellow Heathen heading to the Rock Show tonight at the 40 Watt, let me buy you a drink. Better yet, buy me one!

The reason I wanted you to meet Beecher today is wide and varied. Of the many characters I've created over the years, he's the most simple, honest, kind-hearted, complex, awkwardly amazing, and down to Earth. He's never been on a beer commercial, but I believe him to be the most interesting man in my favorite college town.

Ten or so years ago I had intended to get to know him better. I aimed to tell his stories to the world and let them chuckle heartily while being humbled. But I've neglected ol' Beecher. Partly due to time constraints, sure. It's a burden on your free time being a hotshot blogger with at least four and up to as many as twelve readers. But mostly I've neglected Beecher O'Callaghan because it was just too easy not to start something when I wasn't sure where it would lead.

Now, for better or worse, I'm gonna go see where that road leads.

No, I'm not leaving. Not in the least. Any morning I wake up and have a fresh thought to share or a rant to righteously impart, you'll find it here. Hell, maybe I'll even share another tall tale from the O'Callaghan memoirs here or there. But other than that, my pauses and stops along the way towards autumn may linger a little longer than usual.

To be honest, part of me says it's really none of your business and you probably don't care. Which means there's no real reason to post this diatribe at all. But I've grown fond of my readers here. Mom and Pops raised me to treat others as you'd have them treat you. So just don't be too alarmed if the posts gather some dust in between themselves. As Beecher'd say, "All we are is dust in a breeze." Guess he's not much of a fan for Kansas' music. Regardless, that breeze is aiming this writing vane towards that hole in the wall bar in downtown Athens. Rowena's handing us a mop and telling us to clean that shit up.

Bernie
Hunker'd Down by Bernie at 8:42 AM

Check the calendar for a coach in red and black near your neighborhood. 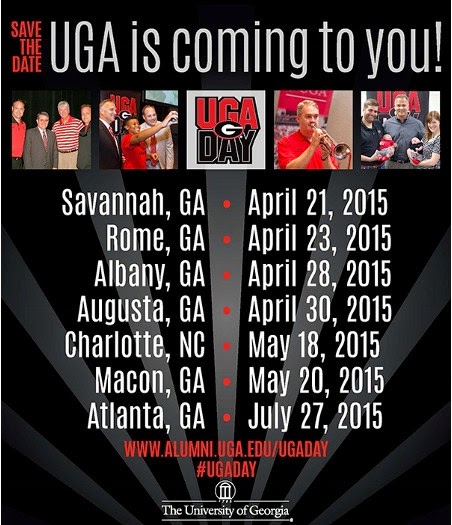 Per the Alumni Association:

The University of Georgia is once again hitting the road to bring the Bulldog spirit to alumni, friends and fans around the Southeast.
From April to July, UGA coaches and administrators will travel to seven cities, sharing their insights into UGA’s upcoming athletic seasons and the latest news from campus. Attendees will also learn more about local UGA Alumni Association chapters and how to become involved.
Each stop on the UGA Day Tour will bring delight to UGA fans of all ages – you won’t want to miss out on the action.
Registration for each stop on the tour will open on this page in March.
If you are interested in serving as a sponsor for UGA Day, please click here for more information.
Go Dawgs!

You could say, with the likes of Chubb, Michel, Marshall, Douglas, and Turman ahead of him from the get go, new running back signee Tae Crowder is bound for a redshirt in 2015. But as Emerson reminds, attrition can sneak up on McLendon's troops quickly.


Crowder at this point is depth. But so was Douglas two years ago. So you never know.

Of course, even though much has been made about Coach Schotty carrying on the pro-style tradition at Georgia, we don't know how much the new offensive coordinator will favor the run versus the pass. However, unless one of the quarterbacks tears it up this spring and summer, we can surely expect a lot of Nick Chubb and his Committee.

Attrition/injury/NCAA judgments may be the only way Crowder avoids a redshirt. But I'm glad to see the staff add a running back to this year's class, even when their JUCO commitment in Carson fell through.

Somewhere deep down, I like to think not using Knowshon to his full availability (even just a little in 2006 to spell Kregg Lumpkin) still sticks in Richt's craw.
Hunker'd Down by Bernie at 7:45 AM

Humpday Hilarity - phrased in the form of a question

For all my teacher friends...especially my own kids' teachers. (h/t Rex)

Commit to the G??

Smokewagon, Walter and I were having this discussion just a few nights ago.

“I’m reading a lot of these websites, and you’ve got people on there saying things like ‘A kid shouldn’t commit to a coach; he should commit to a school,’” Macon County coach Larry Harold said. 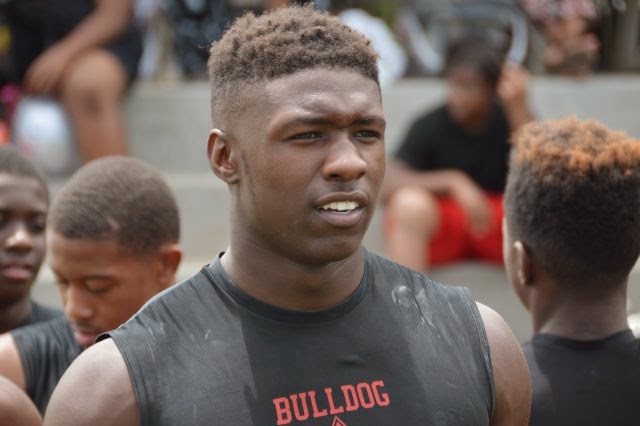 “I just want to tell those people this, because maybe they don’t know: If you’ve never played sports or anything like that, you are more than just a coach to these kids. You’re their dad, their mom, and their extended family. You’re everything to these kids. So when they’re going to get recruited by the next coach, to find the person who is going to be charge of the next four years of their life, they are looking for the same things.”

Recruiting is about relationships. Some of us have a deep rooted relationship with our alma mater. Understandably so.

But a 17 year old from Montezuma GA has yet to experience the Glory Glory of trying to make a 7:50am class after nickel night at O'Malley's. (Or whatever...)

Anyway, I agree with Tyler. I hope the kid makes the best decision for him. He just got caught up in the perfect storm of not being entirely sure, more than one set of gloves as props, and having national, local, and regional media in attendance.

I mean, who hasn't been there and done that?
Hunker'd Down by Bernie at 4:30 AM