Forgot to share this earlier. Took the family to Athens last weekend for the NCAA Men's match against FSU. Pasha and Co. make quick work of Jameis' former team the Seminoles. Before taking the stands, we walked through the ITA Hall of Fame, aka the house that Magill built. It was quite the experience. Here's just one of the gems you can find there. 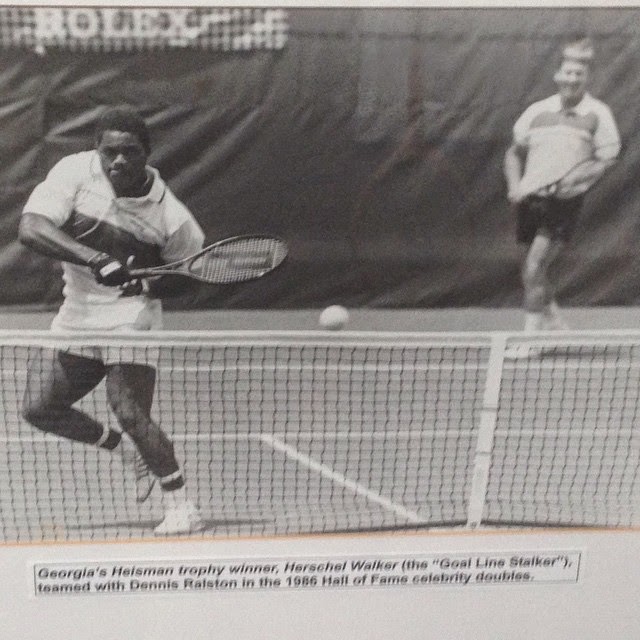 That's football's greatest player, executing a perfect net volley which assuredly blazed right past someone like Cris Collingsorth or maybe Bo Jackson before they just dropped their cute little wooden rackets and walked off the court.

Visiting the ITA HoF isn't quite the same now that it's legendary curator and Athens' finest Dawg has left this Earth. But it's a trip worth making, for sure.
Hunker'd Down by Bernie at 8:07 AM

Spring semester classes are done. GDay and spring practices are a fairly distant memory. As we ease towards the summer months, here are the questions I have rattling around in my head.

1. Who will step up at quarterback?
Yes, why not start out with the obvious? The idea of bringing in the kid from South Bend was laughable to me. But uneasily so. After all, we are still waiting for the next starter under center to emerge. And I truly hope one does over the summer and especially into August camp. If this questions lingers into the season it could seriously hurt the team's chemistry. So if Park or Ramsey or Bauta want it now, the time has come for someone to take the reins.

2. Who will snap the ball to Bauta, Ramsey, and/or Park?
Unlike the question at quarterback, I think we have a better idea of who might start at center. Sophomore Isaiah Wynn is still in a race with some others for the starting job, but he seems to have only solidified his hold this spring. If he returns in August in the same form I would bet the coaches would like to name him the starter given his youth.

3. Who will catch the balls thrown by Bauta, Ramsey, and/or Park?
Aside from overly dramatic concern when a junior with four career catches leaves, the depth at wide receiver should come into question. Mitchell and Scott-Wesley are plenty qualified to sit atop an SEC two deep, but can they sit there for an entire season? McKenzie had a great spring expanding his role in receiving, right up until his injury at GDay. Other names to keep an on are Charlie Hegedus, Reggie Davis, and Shakenneth Williams, as well as true freshman Terry Godwin.

4. Will the run defense improve to a championship level?
Coach Pruitt's 2014 unit, except for a trip to Columbia SC, was very impressive against the run the first half of the season. Once Florida ran right through, around, and over us though all bets were off...until the bowl game. Hence the reason for the clarifier in the question; the run defense was good overall last year, but not up to SEC Championship/BCS Playoffs standards. As was pointed out in Kevin's roundtable, there may be some questions in the secondary, but the edge rush should be second to none which will only help ease the tension with the pass defense. So Pruitt just needs to find some run stoppers for first down and short distances.

5. Will Collin Barber return to 2012-13 form?
We'll especially need this early in the season as a new quarterback gains his footing and teams stack the box to slow down Chubb. Our punt game was strong until last season. I've wondered aloud about Barber's junior season. It makes me wonder, even though there are no lingering physical effects from his 2013 concussion, if he's just not over that hit on Rocky Top.

In a few months many at William Hill American football betting may be wagering on a big season for the Dawgs. Whether Georgia can live up to it may rely mostly on the answers to those questions.
Hunker'd Down by Bernie at 3:29 PM

Recently finished binge-watching Sons of Anarchy. Great, great show. Think these guys could've stretched it into an eighth season though. 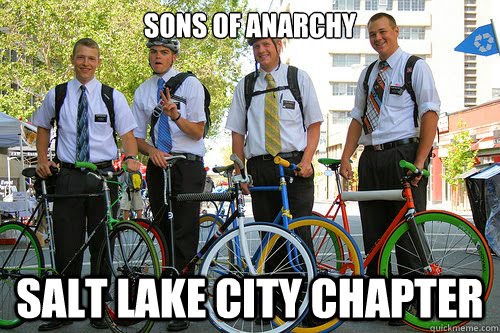