Getting closer y'all. How's your gameface coming along? If you give those practice headlines too long of a glance, run two big miles. There will be no easing into the season a month from now. Go Dawgs! 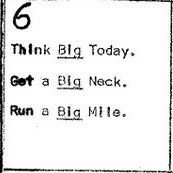 I've neglected my inbox recently, but found this as I was catching up this morning. Thought it was worth sharing. Damn Good Dawg!


HAWKINSVILLE, Ga., August 3, 2015- The Charles Johnson Foundation received a $3,250 NFL Youth Football Camp Grant, recognizing the foundation’s hard work and dedication to its community. The NFL awards these grants to players and coaches making a difference in their hometowns or team cities by hosting free, non-contact youth football camps in the summer. The grant also recognizes efforts to promote sportsmanship and community-wide charitable projects.

“I’m honored that the NFL recognized my foundation with this grant and the funds will go towards helping us keep this event free of charge,” Johnson said. “I’m also grateful to have had the support of three of my Panthers coaches at my Sports Academy helping to teach safe tackling techniques. It’s an important topic and I’m glad we could find a way to highlight it at my event.”

June marked the fourth year of the foundation’s Sports Academy & Community Weekend. Beyond football, dance, tennis, cheer and dance clinics, the two-day event included a Community Night where the foundation presented two $20,000 college scholarships. The Hawkinsville Board of Commissioners also surprised Johnson by presenting him with the Key to the City of Hawkinsville, recognizing his endless effort to give back to his hometown.

ABOUT CHARLES JOHNSON & THE CHARLES JOHNSON FOUNDATION
Charles Johnson is a native of Hawkinsville, GA, and a proud alumnus of Hawkinsville High School. After attending the University of Georgia where he starred at defensive end, Charles was drafted by the Carolina Panthers of the NFL in 2007 and now serves as a captain of the team.

Through eight professional seasons, Charles has received All-Pro recognition on the strength of 62.5 career sacks, placing him among the premier pass-rushers in the league.

"Competition brings out the best in everyone."

Emerson is out in Kansas City catching up with the Chief's roster of former Dawgs. Here he asks Aaron Murray about the QB competition back in Athens.

He’s never met Lambert, the Virginia transfer. But he was in the quarterback room with Bauta for two years, and with Ramsey for one.
“Both great kids. I think a little different quarterback-wise,” Murray said. “Brice is a very pure thrower. That’s probably one of the most beautiful releases you’ll ever see from a quarterback. From day one I was like: That man can throw a football. Good kid, works hard, smart kid.
“Faton, he’s more athletic, can run, bigger kid, can do a lot with zone option read, running, does things like when things break down being able to run. Can also make all the throws as well.”

As Emerson points out, Murray can relate as he went through a competition for the job back in 2010 and then spent four years looking over his shoulder at Hutson Mason. And currently he's the third string quarterback for the Chiefs.

Of course, the paycheck is probably some consolation.
Hunker'd Down by Bernie at 8:48 AM