It's here. Time to head down to Jacksonville with a handle of bourbon and a heart full of hate.


No solos today. Team effort. Let's do this!

...because it WANTS to smack a damn gator.

Three factions of Dawg fans this morning on the eve of the annual renewal of the World’s Largest Outdoor Cocktail Party. Where do you fall?

gAtoR wORd pLaY
On this episode, we learn…

“Jorts” spelled backwards is of course “stroJ”, which in German means one who is proficient in ignoring personal hygiene, is overly casual in their attire even in the presence of other “stroJs”, and overly comfortable existing as a lower class citizen.

You probably knew this already, but in case you’re new around here, a synonym for Corch is Asshat.

At the regional Gainesville FL libraries, every occurrence of the phrase “Touchdown Celebration” is whited out and written over with “Hert Feewings”.

Similarly, history books have all pages ripped out that mention any year prior to 1990.

To pass the state’s high school graduation tests, students must complete a crossword puzzle that only contains two clues - 1 Across “rhymes with Febow” and 1 Down “rhymes with Mebow”.

Steve Shithead Spurrier has more letters than Stanfill. But Bill has more heart.

We all know that the team that needs to win the WLOCP doesn’t always win. Many times it loses. Sometimes it loses very, very badly.

The team that wins the WLOCP wants to win the game. They want it with every fiber of their being. They want it from the crown of their helmet to that last cleat in the turf. They want it more than a fat kid wants cake.

Last year we needed to win, and just look what the hell that got us. It got us a front row view of the team with the pretty scripted helmets across the field that wanted it. They wanted it more. And they got it ALL. DAY. LONG.

That’s later. That’s all next month.

But first, let's bow our heads...dear God in Heaven, please in the name of Robert Edwards, help us want it more. And also find Sony some space. Amen.
Hunker'd Down by Bernie at 8:41 AM

Email ThisBlogThis!Share to TwitterShare to FacebookShare to Pinterest
Dawg Tags: another reason gators suck, bourbon and the * key, DamnGoodDawg, WLOCP

Sure, the shoulder last season had something to do with it. But this game has to be another big reason Leonard Floyd came back for 2015.

Groo beat me to the punch (and landed it more expertly of course) with his post on containing the running game. Georgia's defense this season has underperformed in some ways, but stopping the run of late hasn't been a problem.

My guess is playing disciplined defense has been one of Pruitt's points of great emphasis this week. Just take a look at Cory's breakdown of last season's disaster and it's a clear reminder (albeit an uncomfortable one) of just how easily effective Florida's offense was.

I especially like the point he makes as to the entire defense functioning together. It's clear in some frames that we have the play defended. One guy misses a read or loses sight of the goal in front of them, and then boom...Taylor is into the secondary. Again.

Now, I don't see Florida completely trying to replicate last season's game plan Saturday. But it shouldn't matter. As Cory alludes to, the defense should be seeing those 2014 WLOCP frames in their sleep at this point. They should come in with a chip on their shoulder and play with the discipline the coaches and fans expected last season.

Back to Floyd. This game is made for him. If Jenkins is indeed back or close to 100% it only gives more for this patchwork Florida offensive line to think about. Bellamy has been huge and Floyd will have a field day disrupting running lanes outside and Harris' vision in the backfield.

Then it just becomes a question of whether our offense can control the ball, field position, and the scoreboard. That remains a mystery.
Hunker'd Down by Bernie at 4:54 AM

You had me at "intrigue"

I don't know if Bauta (or Ramsey for that matter) plays any more Saturday than I will. I sure would like to see #10 out there. I've made that clear for months. But at this point in the season it would show the coaches are pulling out all the stops and were true to their word about giving everyone a shot at more playing time.

But even if Lambert takes every snap, I like the idea of adding some mystery to the mix.

“I don’t know how much I’m allowed to say,” he said with a laugh. “Yeah, they’re definitely kind of focusing on putting the pressure on guys and everything like that. I’ll just kind of keep that open ended. I don’t want to get in trouble.”
Blazevich said he knows — and so do his teammates — what will happen with the quarterbacks. He acknowledged keeping that quiet is about not giving away that information to Florida.

I had assumed he was going to end that thought with "message boreds". But yes, florida too. Absolutely.
Hunker'd Down by Bernie at 9:04 PM

He's actually kind of a big deal y'all. Here's a sampling of his accomplishments and eclectic eccentricities: 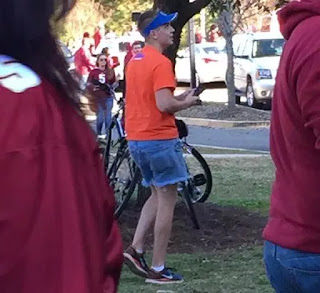 So on Saturday, if you hear something like "Hey kid, your mom looked great wearing my Tebow jersey last night!", you'll know you're sitting near Chippy.

And that his flask is empty.
Hunker'd Down by Bernie at 4:40 AM

Just typing that kid's name is like returning to the scene of a nightmare. But this feature on Harris is also a good reminder that Pruitt's defense must make the Gator sophomore throw the ball.

In just the bits and pieces of two seasons Harris has played in during his time in Gainesville, he has already competed in Neyland Stadium (Tennessee), Doak Campbell Stadium (Florida State), Tiger Stadium (LSU) and the split-stadium atmosphere of the Florida-Georgia game in Jacksonville.
While the quarterback was far from impressive in all of those games, he managed to make plays when necessary — whether it be with his feet, where Harris is arguably the most dangerous, or through the air, where he was serviceable but not extraordinary.
And in each game, the Gators either came away with the victory or had a chance to win on their final possession in every single one of them.

Hard not to agree with Blutarsky on setting the edge as both a means of controlling their run game and containing Harris' ability to hurt you with his feet and his arm. It wasn't much of a surprise when Grier was named the starter early in the season as he's more of what McIlwain wants in a quarterback. But as the article alludes to, Harris is a big play threat. Hell, he hasn't thrown nearly the number of passes that Grier has thrown this season but he's averaging over nine yards per attempt.

Which is why we can't be surprised when McIlwain and Nussmeier try to replicate some of what ran us over last year on the banks of the St. Johns, let it seep in a bit, then hit us over the top.

Ok. That's done. Promise I'll have plenty of reasons for optimism tomorrow and Thursday.
Hunker'd Down by Bernie at 3:24 PM

Looks like their Homecoming Queen from 1991 is getting ready to board a plane y'all. 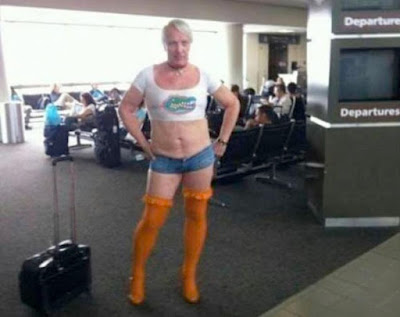 Extra tickets in hand. Anyone looking?

Gonna be a beautiful day in Jacksonville this Saturday. Sunny with a 100% chance of football and a cocktail party to boot!

If you're not tied down by trick or treaters back home, and want to watch the Dawgs play on the bank of the St. Johns, I have just the thing you need - a ticket(s).

Before I give you the contact info, you must pass this one question test:
If you answered yes, I have four extra tickets. Two of them are in section 327, row 10, and the other two are in section 441, row F, seats 17-18. Just email me - berniedawg AT gmail. Shoot me your best offer. Go Dawgs!
Hunker'd Down by Bernie at 4:36 PM

The team I love to hate

In the truest sense of the word, I love these things: my wife, my kids, my dog, my family, my friends, God and the Baby Jesus, the Dawgs, and my back porch.

In the truest sense of the word, I hate these things: satan, yellow jackets, unsweet tea, cold weather, drive thru pulled pork, communism, pedophiles, the gators, as well as the other 12 SEC teams.

But I really hate the gators.

So I use that explanation as a preface for this week’s posts. You're welcome. Now, let's get started. 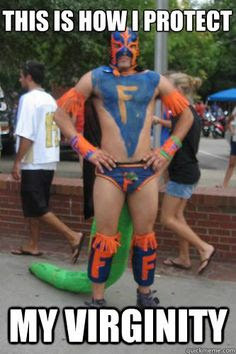 Email ThisBlogThis!Share to TwitterShare to FacebookShare to Pinterest
Dawg Tags: another reason gators suck, bourbon and the * key

The annual tradition continues. Most of you are here because you don't like florida. Some of you are sick of football but not yet tired of reading my trash.

Regardless, we all need to put on our big boy pants. It GA-fla week. This is perfect view of the half-empty stadium is the goal. Do not deviate.