Last week was my first time here at the blog in terms of a head coaching search. But I’ve written through many, many assistant searches. And this one is different than those others in that information is extremely hard to come by. So, I’m going to sit back and wait while hoping that the coordinator hires come fairly quickly.


Here’s some other thoughts:

So, we wait and see. I’ll update if we start to hear something substantiative. Until then, Go Dawgs!
Hunker'd Down by Bernie at 7:21 AM

Was going through some notes last night and realized I'd left a couple things from last week in the notebook. Nothing important or wordy to add. Just some videos to close out an era.

First off, Richt stands up to a local radio asshat after 2012 SECCG.

I had this Vine from the SEC Carwash this summer up throughout the season. Not sure why I find it so humorous. It's just a classic.


And you probably saw this one making the rounds yesterday. Nice curtain call. Go Dawgs!

Leave it to Brad to sum up my main point here in 140 character tweets. 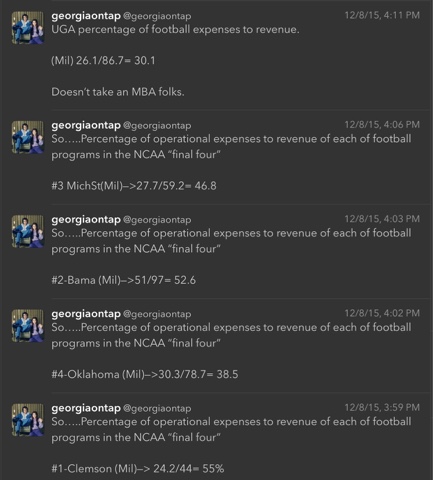 You just fired a successful coach. The message is that you desire to be more successful. So, belly up to the big table brothers!

Give Kirby what he needs, and then give him what he wants too.
Hunker'd Down by Bernie at 7:41 PM

I was able to watch the official press conference last night. It’s not often that we see a head coaching change, much less one that has been this dramatic. So it seems appropriate to share some thoughts.


I say it was a dramatic change because a week ago we were coming to grips with the firing of a coach who spent 15 seasons elevating the program. And a week later we’re welcoming home a former captain who has been waiting patiently on the right time and opportunity to “come home”. As I contemplated that it struck me again how much Kirby Smart in December 2015 reminds me of Mark Richt in December 2000; about 40 years old, beautiful family, longtime successful assistant coming from a program considered to be the gold standard for all others, and more than a little awestruck by the moment.


Before I get into what Coach Smart actually said (and there was plenty), it was clear he was a mixture of nervous and excited. While I know some of that is because of how Nick Saban runs his program, limiting assistant coaches’ exposure to the cameras and voice recorders, it appeared to me that most of the nervous excitement just came naturally from the moment. As a result, I found him to be honest, genuine, and emotionally balanced between feeling pride for how he got to this point and pride in the direction he wants to take Georgia football.


Smart spoke with emotion, specifically when recognizing his family, and he spoke directly, specifically when asked about his vision. Of course there were the baited questions that tried to shine a flashlight on administration’s role in staff decisions, but there were some really good questions that helped Smart address how he’ll manage the next month with two hats and how he’ll handle recruiting during the program’s time of transition. And even when it was clear he was tired of standing up there and was ready to hit the road, he took more questions and coupled them with direct, honest answers.


Coach Smart won’t coach in his first game for many months, but I hold no doubts that he’s ready to be a head coach. Any questions I have are now more along the lines of how he’ll runs things differently than his mentor. I think it’s clear Smart will be involved in all aspects of coaching and game preparation, just like Saban. And I think he’ll grow tired of taking questions during media sessions because he’s constantly thinking of other things he could be doing to get ready for the next game, just like Saban.


But you couldn’t watch that introductory press conference yesterday without thinking how much different the two men are. One of the interesting long range storylines will be how Kirby Smart branches away from Nick Saban’s tree. However, you also couldn’t watch the press conference and realize just how much Kirby Smart has learned from the men he’s played and coached under. He spent most of his time coaching under Saban. And I think that’s where the “relentless passion and energy” nugget comes from.


You see, it will be the relentless part that is key. It’s the relentless part I hope everyone heard because that’s the part we’ve been missing. I’m not saying Coach Richt or his predecessors weren’t goal-driven and hardworking. Not in the least. But the men who wrote their checks weren’t constantly pursuing perfection. The support for the common goal hasn’t always been abundant or even on the same page. That complacency is no longer acceptable. McGarity lead the search, President Morehead nodded his agreement, and the Board voted their unanimous approval. Everyone is on board.

Kirby Smart has spent his lifetime persistently chasing a dream. And his dream doesn’t end at yesterday’s podium. It’s just beginning there.
Hunker'd Down by Bernie at 7:45 AM 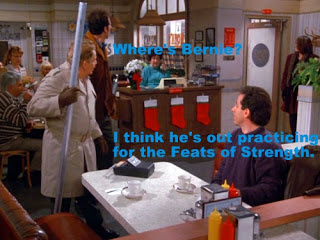 Previously known as #Festivus4TheDawgNus, this bowl pool is the only one you'll find that is brave enough to drag the Festivus Pole out of the crawl space and cheers uncontrollably at the sight of Sony's Jazz Hands.

For you lifers, sorry about the name change. As I set it up, ESPN told me the name for that group had already been taken. Personally, I suspect the title may have been intercepted. But that's just me in my 2015 dark place talking.

Enough of the melodrama, here's the deets: click the link below and enter the password, create your entry as well as your entry's name; the bowl selection is "straight", so you're only picking winners (no spread and no confidence points to negotiate); feel free to share the link (preferably through this blog post, or look for the tweet and/or bookface posts. Then just sit back and watch how badly I beat everyone!!

If you're unfamiliar with the celebration of Festivus you are still allowed to enter my bowl pool. But you first must watch "The Strike" episode in its entirety (check your listings for TBS "Seinfeld" reruns) or simply use his clip to get you started.

All indications are that strength coach Scott Cochran will do the same. Some other tidbits:


It's an exciting time. I know a lot of people are on edge as far as Eason after he visited Gainesville last week. But to be honest, I'm not worried. Things would have to really go south quickly for the relationship to sour enough for him to back out. Smart is an excellent recruiter. He's going to sell his vision to the Easons tonight and reassure them that Jacob's best interests are of the utmost importance to the new staff, even as it evolves. The Clevelands were impressed yesterday. Smart knows what he's selling. Even if it's different for Jacob without Bobo and now Richt in Athens, the new guy will close the deal.


"It's an honor and privilege to return home to the University of Georgia and my home state," said Smart. "I'm deeply appreciative of the faith President Morehead, Greg McGarity, and the Athletic Board Executive Committee have demonstrated in asking me to lead one of the truly great college football programs in the country. I also want to thank Coach Saban. I have been fortunate to spend 11 seasons with him as my mentor and have learned a tremendous amount from him as a coach and teacher. I'm honored and excited for the opportunity at Georgia and promise high energy, effort every day, and hard work every minute on the part of all our coaches, staff and student-athletes."

Welcome back to Athens to him and his family. Go Dawgs!
Hunker'd Down by Bernie at 12:38 PM