I truly appreciate all of you. Thanks for visiting here and reading my dribble and commenting and genuinely understanding that JASPER'S KNEE WAS DOWN!! 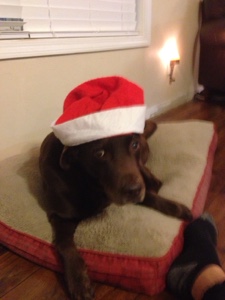 Well, this answers one of this morning's questions.

Been on the road and although I'm now back home, I'm up against the last minute Christmas shoppers. But real quickly...

Sounds like Smart really, really wanted Thomas Brown to stay. But a significant pay raise + title upgrade + loyalty to old coach was too much. I hate it because it was great having Brown back. He was a great player turned coach that did things right on and off the field and happened to have loved the gym as much as the field. What a great role model for players...but time to move on.

And whoa! Todd Hartley is gonna be Richt's special teams' coordinator? That's result of Richt calling the plays down in Miami I'm sure. How else could he make room? Just wish he'd've chosen to do that this past January too.

I would expect the Tax Slayer Bowl to be Lilly last run as a Dawg too. Surely he's heading to Miami as well.

Rocker and Sherrer have been retained. That's something I suggested would happen last week but was a week off on the timing. Sherrer has experience with Kirby prior to Athens and Rocker is a hot commodity, both as a position coach and as a recruiter (read: he has his hands on several current UGA recruits).

What's next? Well, who will be the defensive coordinator? Again, I suggested the bowl game could be a test for Sherrer. But if so, I would think we'd already know he was being tabbed. Instead, I would expect someone Smart is close to will get the nod. Meaning, someone either already on staff or currently coaching in Tuscaloosa. The reason I say that is there seems to be less and less chatter from other teams as to who Kirby is talking to. So keep an eye on Mel Tucker, current Alabama defensive backs coach, as well as Sherrer.

Also, while we're keeping an eye on folks. How about current head coach Bryan McClendon. He seems headed for Columbia SC. But will Brown leaving open up something for the long time Bulldog? I hope so. I just can't stand the thought of him working for the 'Chump.
Hunker'd Down by Bernie at 5:14 AM