Around the Tailgate - The issue at quarterback 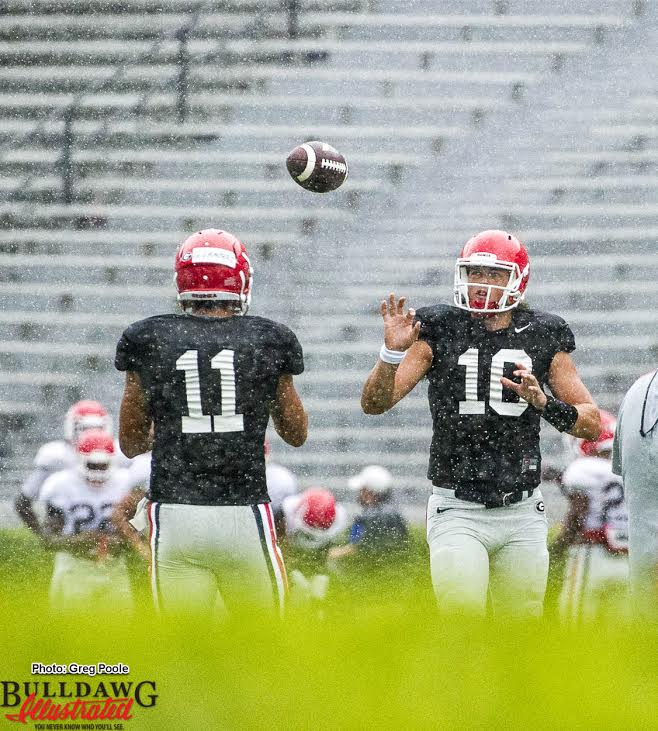 Jacob Eason (10) tossing the ball with Greyson Lambert (11)
A big opener against the Tarheels looms. We have a new coaching staff. The program as a whole has that new car smell. Perhaps more so than any other August there are more questions than answers, so naturally, I turn to some folks I trust to get their opinion on a couple things. Let’s spend a few days going Around the Tailgate!
First let’s tackle the quarterback controversy question issue…
I'm not going to ask your opinion on the quarterback battle because we're all tired of discussing it from that angle. But try this one...First choice - Eason starts the season but it means we have a couple more losses due to his growing pains (think 7-5 with more wins toward the back of the season than the front). But it's clear he's developed very well by season's end and there's no question that next season is going to be special. Or, second choice - We deal with the question marks at quarterback into October and wait for Eason to earn his time in practice in order to get a couple more wins. What's your preference?

Namaman: As for Eason, I am all for working him in like we were doing with Stafford his freshman season.  Get him his series each half and let him get a feel for the speed of a real game before throwing him to the lions. Starting as a true freshman anywhere, much less the SEC is a tall order. I want to believe all of the hype and think he could come out like gangbusters and take the reins from the first snap in the Georgia Dome, but why not let him work his way into it and perhaps by the time we get back Between the Hedges to play Tennessee, Eason will be ready to start on the merits of his play (and not because of an injury to Lambert).
Robert: I do not ever want to sacrifice a win on the football field.  I am absolutely fine dealing with the question marks into October.  What do you tell the seniors on this team?  “You laid the foundation for the 2017 season, but we didn’t put you in the best possible position to win early on in 2016.”?  I also trust the coaches to make the decision here.  I know who the fans want to see, who the media wants to see, and even who the casual football fan wants to see.  What is important is who gives us the best opportunity to win.  In the UNC game, that may not be @skinnyqb10.  It doesn’t matter, because even if he doesn’t take snap one, he will play early and often.
Joe Waterloo: Unless Eason is the clear cut leader I would go with Lambert in game one.  I know a lot of people say Eason is the eventual starter so let him take his lumps in season 1 so next year can be special.  The problem with that is college and pro football are both full of examples of the can't miss prospect getting thrown into action too soon and never recovering from the psychological toll of not living up to expectations.  If Chubb is healthy game one against a UNC defense that was very porous against the run last year I go with Lambert.  Regardless of who the QB is this year we are going to be very dependent on the running game if we are going to have a good year.  Lambert certainly isn't anything  special, and he isn't going to win any games for you, but he's been there and knows how to hand the ball off.  Work in Eason a series or 2 and then wait for week 2 against Nichols St to get more reps.  The goal should be to have him ready by the 2nd half of the season.  That will be more than enough experience heading into next season without sacrificing any legitimate shot at a surprise in 2016.
The Wrangler: All we hear out of camp is that Chubb is healthy and has had good scrimmages and taken a few hits.  Knowing we have one of the best ground games in the conference, I would like to see Eason start.  We can take our lumps with him learning the speed of the game.  He is the most touted recruit for GA since Stafford, and although he never won anything, I would say that was because his defense was very weak.   I agree that Stafford had his freshman moments, but the same could be said of Lambert last year (and he is a “veteran”)   All indications are that our defense should be pretty strong this year.  Outside of Kimbrough, we haven’t lost a lot of players with starting experience, and we know Kirby has had these guys coached up.  Kirby’s job is to build for the future, and the future is Jacob Eason.  While we all want to play in the dome in December, most level headed GA fans just want to see a well-coached team that brings everything they have on every play.  Give me that, and I can live with 7-5 – check that, give me that, and we will compete for the East regardless of the starting QB.
Smokewagon: I would go with option 2, which sounds like 9-3 compared to 7-5.  I am not sure who those other 2 losses would be to, but I can only imagine the extra agony associated with losses 4 and 5.  Going 7-5 is pretty much like going .500 when the schedule has Nicholls State and UL Lafayette.  In both scenarios above, I would presume we feel good at quarterback going into the next season with Eason as a sophomore (and Ramsey as a senior).  Therefore, I prefer option 2 with wins 8 and 9, which may be Auburn and Tech.  I am looking forward to seeing Eason’s productive career and I hope it involves no losses to either those two teams.  As I type this, I am thinking how disappointed I will be with the 3 losses in a 9-3 season.  I am guessing the 3 losses would be Tennessee, Ole Miss, and Florida…… The more I think about this, I think both options stink.  Start Eason and win them all!
That does sound good Smokewagon! As much as it would be nice to have Coach Cheney's salary, I don't envy him trying to decide who to send out to the 2016 season's first huddle. Like Nama said, hopefully, the decision is based on merit and not due to injury. Or by shaking the Magic 8 Ball.
See y'all tomorrow when I ask the guys to circle one game on the schedule.
Hunker'd Down by Bernie at 7:00 AM