Friday Misery - Lulu and Junior and Catherine the Average 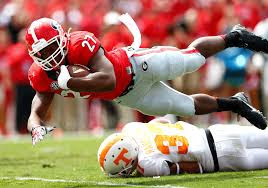 Had this Misery circled on the calendar ever since October 10th, 2015 at about 3:34pm. I've waited that long to see someone exact some measure of revenge. Someone who is about the humblest, most talented running back my kids have ever seen. Someone who worked his ass off to get back..not for this game tomorrow, but for the earliest game he could (in)humanly possibly play in.

My heart wants that. My heart needs that.

We beat them only by earning it. Now buckle your damn chin strap son. Ole Miss was five days, 14 hours, and one minute ago. You gonna let them beat you twice?


Lulu the Great
The easiest way to understand the abject simplicity with which the UTKnoxville HillBillys live is to really listen closely to the “lyrics” of their “fight” song.

A couple years ago I gave you a picture of what Honest Abe and his dear wife Mary saw as he toured the post-Civil War South and traveled through the Tennessee hills. Today I think we need to go back even further to the very beginning.

Yes, back to the Adam and Eve of HillBillys - Junior and Lulu.

“Down” in the Tennessee hills, Junior once had a girl on Rocky Top. According to local legend, she was half bear and the other half was a cat. (Yes, you read that right.) And together they commenced to a level of advanced husbandry no one has, or ever will (hopefully) match.

Catherine the Great, according to rumors, died trying under the weight of a horse.

Catherine the Great evidently was neither half bear nor half cat. (may she rest in peace)

Most civilizations entrenched in the practice of incest and animal seduction die out as a victim of their their unGodly nature. Somehow “corn from a jar” has sustained these hillbilly deviants to the point where their tree of life ain’t seen a branch since the day Lulu dropped that spork into an empty can of beans, farted and then Junior felt his Wranglers rise to attention.

Hey hoss, you can’t crush faces with a box of kleenex
Can you imagine…”We just threw a box of tissue and got snot on their nose...we just snotted their face!!”

“Chubb may not play.”
“We can’t put no pressure on anybody.”
“We couldn’t block a no parking zone with a semi truck and a herd of buffaloes.”
“I have a real, real sad and college football won’t make me happy no more.”
“I burnt my tater tots yesterday and momma won't go back to the store!”
The thing about humiliating losses like last Saturday is that they tend to beat the fanbase more than once. Hell, some of y’all done gave up on the entire season! And some more have already started the next coaching search!

Lord A’mighty! What in the name of all things Holy! Look, it’s one thing to get caught with your drawers down. You’re embarrassed and ashamed and oh no Chad Kelly just threw another touchdown pass 187 yards downfield while side-stepping a dozen rabid black bears! But it’s another thing altogether to get caught with your pants down with one arm around ol’ man Cooter’s goat and the other cradling a box of Franzia.

We’re GEORGIA goddammit! WAKE the F up! You don’t shit the bed and spend the rest of the season wallowing in it. You stand up and clean yourself off. You grab a mop and get back down to basics. You GET YOUR ASS DOWN IN A THREE POINT STANCE BY THE MAILBOX AND WAIT FOR THAT BASTARD MAILMAN TO COME AROUND JUST TO GET ONE MORE REP IN!

We’re 3-1! THREE and one! Did you wait around all offseason to get shit-faced wasted on your own self-pity? Was it over when Casey Clausen hit Travis Stephens on the screen? No!

So put down your sloppy box of tissues and strap on them boots. The first act is over, so tomorrow begins the second stanza and I’m damn sure not tuning up for some gotdamn song about non-existent animals and strangers that disappear into smoggy smoke.

I told y’all at the beginning of the week this one was different. I NEED to know y’all care. I HAVE to know you have the INTESTINAL FORTITUDE of Damien Gary and Verron Haynes combined. I’ve GOT to know you want this one more than your next breath, because just as Butchie and his boys aren’t coming to town in a Prius with a BB gun in the floorboard, we ain’t planning on sniffling like a bunch fancy pants’d sissies before the coin toss.

Brick by brick...F that. Attack the GOTdamn day and let's beat these tourdefranzia assholes!

Now, please bow your heads...dear Lord, please let their band get a flat tire and also help us make Josh Dobbs over work his deoderant. Blessed! Jazz Hands! Go Dawgs!
Hunker'd Down by Bernie at 5:31 AM

Email ThisBlogThis!Share to TwitterShare to FacebookShare to Pinterest
Dawg Tags: A Confederacy of Dunces, bourbon and the * key, HillBillys have tooth
Newer Post Older Post Home