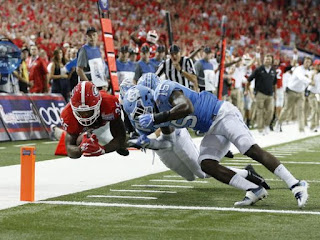 I'm not too concerned about Chubb, for two reasons. One, I think he'll be fine to play by Saturday. And two, truly running back depth is the least of our concerns. Sony, Holyfield, and Herrien all looked good against Ole Miss. I think Chaney will spread the carries between those three while limiting Chubb.

I'd also like to see us challenge the edge with toss sweeps and quick screens. Our talented backups at tailback are quick enough to mask some of our blocking woes, More so than Chubb is able to. Throw some screens in there and eventually Eason is going to have a lot of room to work with with his tight ends.

On defense Tucker should sell out to contain their run game. Force DeBord's hand into putting more of the load towards Dobbs' arm. Yesterday sUGArdaddy mentioned that we've most likely faced the best quarterbacks on our schedule. I'd also add that we've most likely faced the biggest, most talented receivers on the schedule as well. Josh Malone is dangerous and will get opportunities to make plays, but our secondary isn't going to be challenged as a whole like we were in Oxford.

Lastly, I hope the crowd really comes in with an understanding of the weight of this game. Sure, Butchie got his big signature win over the gators last week. But the pressure is still on them at this point. The crowd can be a major factor. If the fans can come in with the energy of 2013 LSU, one of the more recent times I've heard Sanford at its loudest, then it could be a really good night in Athens.