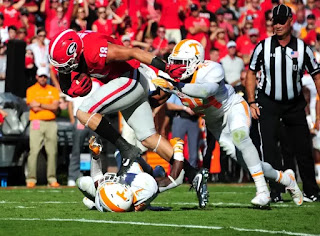 If you're coming here for a pity party or to look for blame, keep clicking amigo. I'm pretty okay all things considered.

Because on a day when the referees brought their C- game, the team's best player only played one snap, and a team with vastly more experience was down and out against our young pups...I can only see sunshine this morning.

But dear God in Heaven, I absolutely HATE losing to those bastards. Ugh. Onto the bullet points!

I mean, there ain’t many dudes on earth able to make those throws. That’s what Kirby means when we grew up today. Hurts still, but..wow.
— Bernie (@BernieDawg) October 2, 2016

I don't think there's much more to say other than the road ahead is much more manageable. That's not to say that there aren't challenges ahead. After all, this is still a young team with a young coach and a freshman quarterback.

But, even though we lost to that team from the inbred hills of tenersee, I feel good about where this team and this program is heading. Chubb played one play. they had a hail mary answered, and Catalina still hasn't been named as an accomplice to a murder. The sun is about to rise. And I'm already starting to get hungry for some chicken.
Hunker'd Down by Bernie at 6:17 AM