Stating the obvious, this spring game has a different feel. A buzz is in the air and I expect a record crowd tomorrow in Athens. Most everyone will try to crowd into Sanford for a glimpse at the rapper that bailed McG out, the pigskin slinger that should be at his prom in the northwest territories, and the coach that Mama called to come home.

Other than those new, shiny things, this will eventually be like any other spring game that provides more questions than actual answers. Unless Lambert takes a shotgun snap on first down and punts it into the Hedges while Ramsey wrestles Hairy in the northeast corner of the endzone, and Eason goes 10/12 for 250+ and a bomb to Godwin to win the game, we're not going to know who the starting quarterback against UNC will be until we hit Atlanta. (Pssstt, it'll be Eason...)

But, that doesn't mean there isn't much to glean from what we see tomorrow. Here's some things I'll be looking forward to observing on the field...

And most importantly (to me at least), offensive line play. Catalina gets here this summer to add some depth. Is Ben Cleveland game ready? Have last years starters bulked up? Do we at least look like we can develop some quality depth heading into the Fall?

If you're heading into town, have a great day in Athens. It's always nice to see the campus in the spring time, especially when you can also hear the crack of the pads 'tween the hedges!

Wait, there's talk of SEC realignment? How long have I been hibernating? 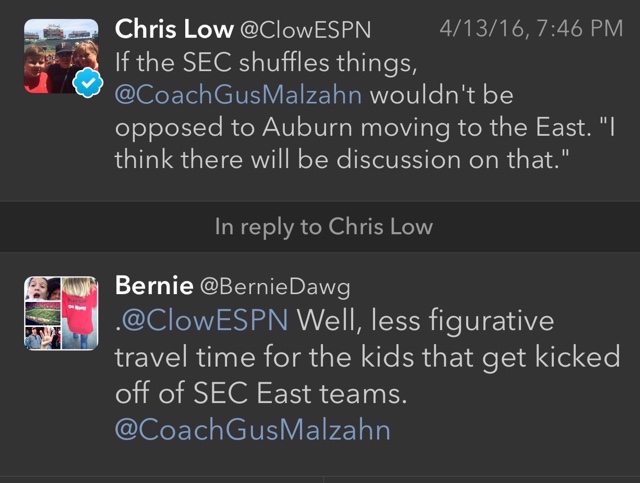 I'm not ready for our property value to plummet that much. I mean, Muschamp ain't even finished unpacking (again) yet.

THE REDCOATS ARE COMING!!

Fancy that, the Marching Band playing at halftime. We can argue about the pros and cons I guess. I'm not sure what the excitement was about for someone playing a couple songs at halftime in a stadium. It's not like my daughters would be able to even see that it was actually the Spice Girls (or insert whatever musical act gets your kids' toes a tappin') on stage. I'm fine listening to the Redcoats or whatever Beastie Boys songs ol' McGarity wants to play over the PA.

And that leads me to the truly sad part. Why did Greg allow this to get so out of control? Why mention the possibility if you don't have Chris Stapleton or Sturgill Simpson in your pocket already?

And perhaps most importantly, there's at least an appearance that the administration is not as engaged in the idea of going in at all costs. In other words, #93KDay has lost some pizzazz. And that lies at the feet of the dudes in the suits, not the ones with the whistles.
Hunker'd Down by Bernie at 7:54 AM

"You'll shoot your eye out kid!"

So news broke of Julian Rochester and Chad Clay getting arrested on felony counts of having a weapon in a school zone and criminal damage to property, and we immediately wonder how Smart's Law Enforcement Jimmy Williamson Appreciation Day went so wrong.

But UGA emailed the press shortly after mentioning that it was a BB gun the two freshmen were toying with that lead to the trouble.

My first thought, did I ever have a BB gun while matriculating in Athens? Too long ago to remember. But connecting the dots in this story I'm sure if I did have one I never used it to shoot at something in between study sessions for Poli Sci 101.

My second thought leads to punishment. Smart said that details are still emerging. But you can expect Tracy Rocker is more than fed up about his defensive linemen getting into trouble. Hell, he may go so far as to make Rochester wear Aunt Clara's bunny suit on the sidelines against North Carolina.