From one week ago to one week from today

One week from right now we all heard the cries. We were practically in unison. It all sucked, and it was so, so painful. Even though we came into September knowing we'd face some growing pains we didn't know it'd cost us a Homecoming game against Vanderbilt.

But then you went a bridge too far. Woke up Sunday to some saying they'd be back when Kirby had a chance to get his own players. Many of y'all even said you were done completely; you can longer stand the thought of standing alongside the rest of us.

Good riddance. Because what lies ahead is not for the feint of heart or those who can't unwind their panties in time to put on their big boy britches.

One week from right now we play Florida. If you're not down there with me and the team and the rest of the real fans, I hope you tune in and hunker down with your big screen tv. I hope you'll join me as just a guy that can never give up on his team. A guy that believes you endure the hard times to enjoy the good.

If you're as ready for the last five games as you were the first six, let's join hands. If you're not done whining and you'd like another few weeks to finish your self-pity smoothie...well, we'll see you whenever you find a chinstrap that snaps tight enough.

As Lenny and Ricky Earl embarked on their sixth and eighth year respectively at the University of Florida, both studying herbivology and the science of cardboard cases as coolers... 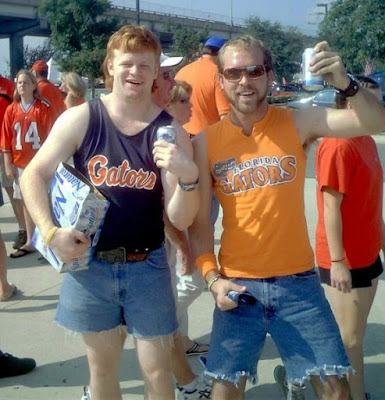 Ricky Earl - "Haha! And hey, bring your jeans cuz momma said we could use the scissors!"
Hunker'd Down by Bernie at 6:49 AM

Bob and his youngest son Bobby Dean Joe bought tickets to a Florida baseball game, only they didn't know two things: 1) how to spell baseball, and 2) that baseball season was over a month away from it's season's start.

They weren't sure what kind of game they ended up watching, but they did their best trying to get the guy with the weird looking ball to steal third.

Help a Gator Hater out

Do you know someone that needs to hate the gators more? Well, then show them this website and help a UGA student earn some extra credit for his class before the WLOCP. 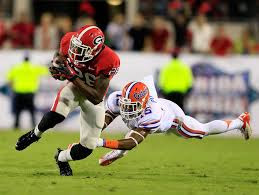 "We're going to keep getting better and try to win out."

I don't know about you, but the fact that two of the team's juniors - Nick Chubb and Lorenzo Carter - provide the player quotes for this article does me some good.


“I hope it’s a tough few weeks,” junior outside linebacker Lorenzo Carter said. “I plan on pushing our players. The leadership is going to push our players and if you’re not ready to respond then that’s going to be a rough two weeks for you. We’re going to come out in these two weeks and work. That’s all we can do is grind.”

Practicing mad might not be a bad thing. That and maybe bring Shawn Williams back for a few speeches the next couple weeks. Worked a few years back leading up to the WLOCP.
Hunker'd Down by Bernie at 8:09 AM

Just as we're beyond tired of the ill-gotten 2007 Alabama analogy, I'm also tired of one other talking point that I'm hearing a lot this season, but especially after Saturday's loss.

But first I want to say that losing to Vanderbilt at home in no way completely sours my view of the program's direction. I believe the change we made last December, while it may not have come due in my eyes at the time, was what was best for all involved. Kirby can get us there, but we knew it wasn't going to happen overnight.

That said, since we made the change, using phrases like "Calm down, it's going to take some time" or "Hey, Kirby just needs some more players" is way off the mark.

Once we said ten wins wasn't good enough we became that program. We became the fans that expect to win each and every Saturday. So losing to Vanderbilt does not and should not evoke a sense of calm. Mostly because even though Kirby may not have all the players he needs to get us to Atlanta, he certainly has enough of them to win that game Saturday.

Many are expecting to lose to Florida. I get that. Losing three of the last four games will do that to you. But it's not in my makeup and I doubt it's the kind of mindset that a true championship program would tolerate much.

The bar has been set high and we need to get used to seeing it up there above our fingers yet still desperately reaching to grasp a hold. Kirby knew this when he took the job and he'd probably be the first to tell you that the time is now. It's Attack the Day not Get ready to attack in another couple years...hopefully.

In short, we're still a winning program that aspires to be a championship program. The difference is that ten months ago we pushed all our chips to the center of the table. So it's a new era. We need to start acting like it.
Hunker'd Down by Bernie at 7:14 AM

Sunday Thoughts on being seated on the short bus

Yes, the play call on 4th and short where we ignore the fact that we have the nation's best running back and toss it to the smallest kid in D1 football...that sucked.

But that's not what lost us that game.

Wow! We found new and exciting ways to get penalized! Ways I've never even heard of before!

But that's not why we can't stop gnashing our teeth.

Yes, giving up three billion yards on that screen pass on their last drive was as frustrating a play as I've ever witnessed. 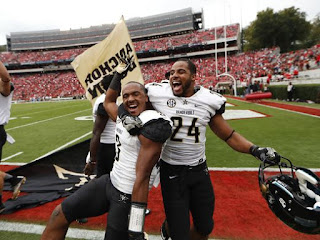 But that's not what made us lose to Vanderbilt on Homecoming.

But that's not why we kicked ourselves in the balls yesterday for 60 minutes of a tackle football game with Vanderbilt University only to lose by one point.

We went into Sanford yesterday having been told that the 'Dores were as bad if not worse than we were in special teams.

And Lawd Have Mercy did we prove we're the worst there! Sure, we have found ourselves a placekicker as Rodrigo was most certainly a player of the game for us. But we can't cover kicks...we can't cover punts...we can't use half a brain and let the ball go out of bounds on a kickoff and instead decide to let the offense start on our own 2 yard line...we can't do anything special or even remotely close to Beamer Ball.

Special Teams is why we lost yesterday. The defense gave up 171 yards, two and a half of which came on Vandy's first scoring "drive" thanks wholeheartedly to...you guessed it! Special Teams!

Yes, kids. This is what it feels like to lose to Vandy. At home. On Homecoming.

Jesus. It's not rocket surgery and yes I know a coaching change comes with its inherent growing pains. But Holy Hell, did Chubb really fight all the way back from the most devastating knee injury I've ever seen to watch 16 get dragged down to the turf like a rag doll a full yard short?

Players play and coaches coach. Draw a line in the sand and let's play some damn football!
Hunker'd Down by Bernie at 6:00 AM