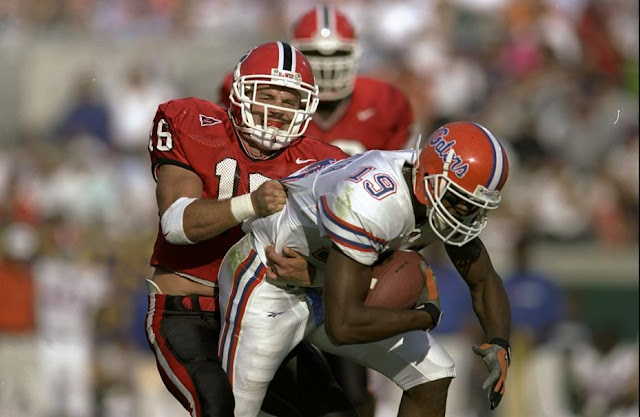 Prelude
Washed ashore on the northern bank of the St. Johns river, I was dizzy and disoriented. Twice I attempted to rise, just to my knees, but gravity easily overpowered me and my face came crashing back down to Earth.

As I lay there, exhausted and despondent, I thought to myself, “This is what losing three of four feels like.” The shame was just too thick to slice through and even days later the memories would not relent.

We had embraced the wrong tenets and got caught believing better of ourselves. Against inferior opponents you can sometimes survive, but not on a day when they wanted it so much more. So I was left to drift listlessly towards the next destination, the next moment of judgment, with nothing to tend to my wounds except time and the marsh water of the River’s lower basin.

Night was falling. In the distance I could hear the motorized sounds from the expressway. But I could not see the lights because my eyes had grown too heavy.

“Goddamn Vanderbilt,” was my last thought before I passed out.

Down. But not out.
By dawn the realization that this territory was not unchartered only intensified. The pain continued to be persistent, but hope can be an incredible analgesic.

And I saw you there too, as well as the others. As the Sun crested over Exchange Island we realized our strength in numbers. We were fortified by our position. I looked deep into your eyes and you mine, and we both saw a familiar resolve.

We have seen some shit man. We have traversed this rickety bridge. To just stop and not move forward is to give up. You, me, Kirby, his players, we’re just not wired that way. To see the top we must endure the cold, dark valley.

Better days are ahead and these struggles will only make them that much sweeter. So we dust ourselves off and set our bearings. There is much work to be done.

The sweet salve of a WLOCP win.
Yes, some have chosen not to bear arms. The fight has lost them and they are no longer propelled to join our side. They’re the same ones that missed Nat Hudson throwing that block in 1980. Lindsay ran and ran, but not before their eyes. Instead they sobbed quietly in a corner after shutting the television off.

They know not how to see a fight through to the end. Their drawers are too tight and their grits are watery. Whether that is a result of their own personality flaws or poor parental influence when they were younger, is not our place to dwell in. Perhaps they only chewed crayons in kindergarten instead of their teacher showing them the beauty that could come forth from the waxy, vivid Crayola box.

Their only hope is that we circle the wagons in their absence. Have mercy they just need to be turned toward the light!

There was a point in time when players like Bobo, Edwards, Smart, and Champ decided they were just goddamned tired of taking the beating. No one gave those guys a chance against a Spurrier team that was the defending national champion and reloaded with talent. But those Dawgs didn’t back down and they certainly didn’t worry about those that had given up on them.

Same can be said of the 2004 team, as well as the teams in 2007 and 2012. They weren’t worried about Florida’s ranking and their streak in Jacksonville. They didn’t bother with supporters who had left their team’s colors at the bottom of the laundry pile. They didn’t concern themselves with fanatics that had only become fanatical about bitching and moaning more than hunkering down and Glory Glory.

Brothers, sisters...the fight continues on tomorrow. Together we cross onto Gator Bowl Blvd and populate the lots along Duval and Tallyrand. Many others will join us in spirit, a cocktail in their hand and some grit left in their belly. We’ll join hands and we’ll watch the team bus approach. We’ll embolden those players’ attitude and we’ll pledge our support through to the end.

Because win or lose, it is an absolute pleasure. Having endured so many losses together, we can stomach the possibility of one more while summoning forth the very voice intent on preventing it.

As Larry Munson and God as my witness, I look forward to looking back on the banks of the St. Johns tomorrow and smiling. Together we washed ashore broken and battered. And together we will walk away having seen players like Lorenzo, Atkins, Payne, Sony, and Chubb experience the utter joy of winning in Jacksonville.

Now, let us pray...dear Lord please protect us from this enemy race and let the ice in our drinks have the will of Nat Hudson and the fortitude of Robert Edwards. First downs for Glory! Amen.
Hunker'd Down by Bernie at 5:21 AM

Email ThisBlogThis!Share to TwitterShare to FacebookShare to Pinterest
Dawg Tags: bourbon and the * key, Georgia Bulldogs Football, this rotgut moonshine is making me sick, WLOCP

Now don't get me wrong, I hate them. But Lord Almighty gator fans sure are funny sometimes.

That's Side Visor Darth Jorts. He's powered by Zima and spends most of the game tracking the cameras on the sideline rather than the game itself. On Fridays his mom makes him tater tots.

And this guy, Jar Jar Boinks. He majored in toy collecting, but never completed his degree. He's an assistant manager at a comic book store and only paid $75 for this custom costume. Unfortunately he paid $230 for this faulty light saber on craigslist.
Hunker'd Down by Bernie at 7:06 AM

Different is a good thing

Because we all remember what last year in Jax smelled like.

UGA RB Sony Michel didn't quite go Joe Namath on Florida: "I guarantee you this year is going to be different." pic.twitter.com/3lH9AkPNvx
— Marc Weiszer (@marcweiszer) October 25, 2016

Last week's details of a search of Natrez Patrick's dorm room have been lingering in the air as the team prepares for its annual clash with Florida in Jacksonville. Both Patrick and Roquan Smith were tested after the search and the results were announced this morning.

UGA announces that LBs Roquan Smith and Natrez Patrick are NOT suspended. They are good to go for Florida. Tested negative on drug tests.
— Marc Weiszer (@marcweiszer) October 24, 2016

So, the team's leading tacklers will be in uniform and that's certainly welcome news. The players likely won't escape punishment for the circumstances leading to the search as well as the admission that a drink bottle with a hidden department was used for hiding marijuana.

But lucky for Georgia, that's a bridge to cross after the team bus rumbles down Gator Bowl Boulevard.