This is pure gold from All-American Scott Woerner as he recounts many an old McWhorter Hall tale. Very enjoyable read, and one you young whipper-snappers would especially enjoy.


We had a TV room that had one TV. Now, remember, this was before cable; we only had three or four channels on a good day. There were also no remote controls in those days, so it was the responsibility of freshmen to get up and change the channel when needed. We did have a Coke machine on the second floor my first year before an irritated football player. He picked up the entire machine and tossed it off the second floor. Why? That one is easy; the machine took his money — 25 cents at the time.

Times have certainly changed. Thankful for guys from that era that are willing to share like that. Go Dawgs!
Hunker'd Down by Bernie at 12:52 PM

Yes, I understand fans' fascination with the black jerseys. Whether you are pro-alternate uni or against, I know that it's not your fault the discussion is so lively and energetic each season as to when/if the black ones will be donned and displayed.

I'm just sick of hearing about it. Who really cares? Ask yourself that question. Even if you have a strong opinion one way or another, do you really care which jersey your team wears? I mean, haven't we explored the "Black Jerseys" from every possible angle six ways from Sunday?

I've long been over it. I really, really wish UGA would just keep it all under wraps and make it a surprise so that the only discussion happens the day after rather than the weeks before. 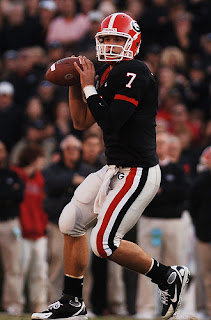 Or, just scrap the black ones and wear road whites all season!

Just like with the black jerseys, I guess I understand the comparisons some are dying to make with Jacob Eason and Stafford. They're both prototype quarterbacks in stature and arm strength. Like Stafford, Eason was destined for an NFL mock draft before he even finished his senior year of high school.

But that's about where the comparisons should end (for now). I've mentioned before that I think at this stage in his development Eason is making decisions based more on his vision than his arm. That's something we couldn't always say about Stafford. In fact, as good a talent as Stafford was and as many games as he won for us, there was always that tendency to make plays with sheer arm strength. That's a trap even the best quarterbacks can't get by with in the SEC.

My hope for Eason is beyond that. Again, it's still early, but I think it's fair to say that we're seeing a young quarterback that sees the field and works through his progressions more and more with each game. Stafford had 10 interceptions his junior year. Eason stands to attempt more passes than Stafford did that season and currently has half as many interceptions.

Now, part of that is coaching. How many throws have you seen Eason make deep and between the hash marks? Most of his deep passes are safer and down the sideline. I think that goes back to what we were hearing during August, that Eason was steps ahead of the experienced guys but not reading things well enough to challenge the heart of the defense. Stafford might have had security clearance for more of the field when he dropped back to pass.

Regardless I think it's not an apt comparison to make and ultimately I hope we are more likely to compare Eason to someone like Murray who lead the team to two SEC Championship Games. Preferably with the win-loss record in Atlanta flipped in Eason's favor.   😎
Hunker'd Down by Bernie at 5:39 AM

What makes a Cajun Ragin'?

Don't tell Kirby, but I'm extending the 24 hour rule before we get real serious about the next opponent because yes indeed I actually do remember Nicholls State oh Lord Jesus can we please have nice things?

Last night I was reminded that we opened with UL Lafayette in Aaron Murray's first game back in 2010, as well as this tailgate video Nama cooked up...with plenty of Tabasco.

Email ThisBlogThis!Share to TwitterShare to FacebookShare to Pinterest
Dawg Tags: as seen on YouTube, too much tailgate

What a night. What a game!

My feelings driving in yesterday were that I was much more worried about containing their defensive line than I was the vaunted Auburn rushing attack. We have defensive players and coaches that have beaten that thing before. Plenty of times.

Which brings me to the player of the game. I can't explain why they came out in the second half slinging the ball, but it sure was nice to see Mo Smith make the play of the game. He was surprised as anyone to see the ball come his way, but took the opportunity and made a helluva play. Needless to say, without that we're probably gnashing our teeth a lot more over the offense's inability to score.

But the offensive gameplan I thought was solid. Sure, Chaney got too cute in the red zone, but in a game of field position (especially in the second half) he was able to slow Auburn's pass rush down by spreading the field and was able to get precious yards on the ground utilizing Sony and Chubb the way we've been waiting to see them used all season.

Speaking of field position, a couple of good Ramsey punts and kicking that sucker into the endzone on kickoffs gave the defense just what they needed: an uncomfortable and frustrated Auburn offense that never could produce a big play.

And kudos to the crowd too. In a season that has seen some ups and plenty of downs, they brought the fire and passion. Truly a great win for all involved. Go Dawgs!