the Friday Misery is a Champion at Comeuppance

Butch’s temperature, a week to week examination
Week 1, visit to Athletic Director’s office
Butch - “Wahoo! You like that goal line stand in OT BABY!!”
AD Currie - “Wonderful. Now put that damn trash can back in the locker room. Coach football, not future internet memes you sonofabitch.” 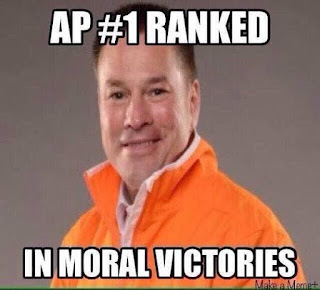 Butch - “Put that whoopin’ on Indiana State boy! Offense starting to come together. I like this kid Dormady. Think I might make a poster of him...Stormin’ the Beaches of Dormady. Nice!”
Booster Cleetus - “No you’re not.”
Booster Bobby Jo - “Boy, you gotta purty mouth. Reminds me of ma best goat”

Week 3, family dinner table
Butch - “That was one heckuva throw. Can’t believe we lost that one like that. Hate it for my guys.”
Wife - “Yeh, into single coverage, on the last play of the game, 60 yards from the endzone. Duh!” (tops glass off with the boxed wine and storms down hallway)
Son 1 - “And that was a BAD gator team Dad, real bad.”
Son 2 - “Can we live in Florida next year and not Michigan or Ohio again?”
Son 3 - “Pass the tater tots please.”

Week 4, getting that wannabe high and tight
Butch - “I tell ya, that’s about the best 0-4 team I’ve ever coached against. Wow!”
Barber - “What about those smokey gray uniforms again? And a pregame speech about flashlights making the dark spots shine bright!”
Butch - “Oh, yeh. I like that! And the batteries are like the energy that makes it all happen!”

(Mystery solved. It’s been the barber all along, from the bricks through the trashcan. He’s got clippers in one hand and a copy of “Coaching Motivationals for Dummies” in the other.)

Week 5, back in Currie’s office
Butch - “KnockKnock! Hey there John, I brought the trashcan like you asked. I was wonderin…”
Currie - “Good, close the door.”


The buzz cut from La Mancha
Don Quixote was a fictional dreamer; a romantic Spanish gentleman, in pasteboard armor and saddled on a horse well past its prime, driven to insanity by his relentless pursuit of Chivalry.

Butch Jones is an actual professional cheerleader; paid handsomely as a college football coach to drum up motivational slogans and tactics in a continuous failing pursuit of an SEC East crown.

For both, the beginning is whimsical and delightful. Knoxville, much like the Spanish countryside of the 1600s, was a blank canvas in 2013 and in much need of a new spark and direction. Enter Jones who quickly proclaims himself a master mason proficient in the use of words and catchphrases as bonding agents.

The results are mixed. I’m sure Spanish prostitutes didn’t mind being referred to as high class ladies and the innkeepers enjoyed being “lords of the castle”, but when windmills are envisioned as monstrous,murderous giants things take a dark turn.

Besting Georgia two seasons in a row and ending Florida’s 11 year win streak really put Tennessee’s future in a rosy hue. But the epic tumble the Vols experienced the rest of the 2016 season was a dramatic, painful adventure on Rocky Top, as if Rocinante itself had thrown Butch from the saddle into his own pile of bricks.

But here’s where the romantic cheerleader takes a different path from Cervantes’ star gazing Hidalgo. Quixote never parts ways with his “squire”, Sancho Panza. They’re relationship is as loyal as it is symbiotic. Jones on the other hand fires assistants, thereby uprooting their families, in order to continue his ponzi scheme of slogans. After the 2015 season it was defensive coordinator John Jancek, and after last season it was newly hired offensive coordinator Mike DeBord. What started out as a whimsical play with words has devolved into a bloody battle of stab the scapegoat in the back.

Perhaps Cervantes himself said it best: “The truth may be stretched thin, but it never breaks, and it always surfaces above lies, as oil floats on water.” Butch, you’ve run out of heads to lop off and your trashcan is full of broken bricks. Perhaps your barber can provide some sound investment advice for that buyout.


Down to the business of kicking ass
Ladies and gentlemen, though we have more than one enemy tomorrow, only one of them is truly formidable. And no, it doesn’t wear orange and it doesn’t play football.

Hear me out now.

Understand, Tennessee can’t beat us. They just can’t. They are one thread away from becoming completely unraveled. They’re the trash at the bottom of the bin. They’re soon to be has beens being cheered on by low lifes in checkerboard overalls and fancy pants frat boys with a funnel protruding from their nether regions. That’s all they are. They just aren’t able to beat us.

UMass exposed them for what they are, they just lacked the talent and ability to finish the job. Georgia comes out tomorrow and smacks them in the mouth and they’ll crumble into a pile of rubble at their false prophet’s feet.

However, if not taken seriously, our true enemy can absolutely be formidable. She can turn the most prepared and talented team into an on field three ring circus. Her name is Adversity and she planted the Neyland sod that claimed three ACLs in 2013 and Chubb’s entire knee in 2015.

She connives for missed blocking assignments. Next thing you know your quarterback just got blind-sided and the ball is scooped up and headed the other damn direction.

Adversity gives birth to setbacks. And setbacks don’t treat Georgia well. They tend to make a better Georgia team fall flat at a lesser opponent’s feet. They get into our heads and scramble things up until the next thing you know that squib kick turned into a game tying field goal and oops they just intercepted and somehow we just lost to georgia tech.

So tomorrow, when JimBob Cooter drops a stack of cash in a referee’s pocket and Chubb gets flagged for roughing the passer because he ran out of bounds and tripped over Dormady’s out-stretched cleat, we have to stare back at Adversity with a steely gaze.

“You messing with the wrong mothereffer today bitch.”

Kirby has filled us with hope. We believe we’re past the days of wetting the proverbial bed and making up excuses for our own inadequacies. Maybe so. But we’re right where Missy State fans were this time last week. And those doggies got walloped from the get-go and never bothered to get back up into the fray.

So when She swings and connects, don’t reach up to wipe the blood from your mouth. Smile at Her and tell her what Damien and Greenie and McMichael and Verron told her before that last drive in ‘02 - “Nice shot, but you’re gonna need more than that today.”

It’s a long road through a college football season. Knoxville is just the next stop. Let’s treat it like a business trip. And like it says right there on our business card,

Georgia Football
“We’re here to make your life even more of a living hell.”
Four dissatisfied customers from Starkville to South Bend.
You’re next!

Through our own faults, we’ve fallen victim to this Hillbilly regime’s magic and sheer dumb luck before. Still today, two years removed, they mock our best player’s injury, like some dipshit point of pride that they can’t use fertilizer for anything other than their own goat farming. For that and many other reasons they need their comeuppance. They’re overdue for a good ass whoopin’. Set your jaw and turn your motor all the way to HIGH.

Email ThisBlogThis!Share to TwitterShare to FacebookShare to Pinterest
Dawg Tags: bourbon and the * key, HillBillys have tooth, idiots not named Terence