the Friday Misery has filed a SAVAGE claim

Last Saturday was not just a win, it was one of those wins that can define a program. We not only got our eighth win of the season, but we set an arch enemy back so far they decided to fire their coach and start over. That's something Tennessee and probably Missouri will do as well after their beat downs at the hands of the our Dawgs.

So look out Muschamp and Malzahn and Stoops, y'all're up!

So with such a colossal win, why haven't I posted any thoughts about it? Why haven't I weighed in this week on the possibility that the Dawgs could clinch the East in Sanford with a win over the Gamecocks paired with a Kentucky loss to Ole Miss?

Well, Derrick, Eddie, Colby and I found a strange way to celebrate the epic win in Jacksonville. 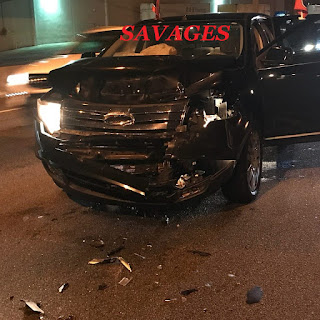 It's hard to type wearing a sling. But the good news is that everyone involved is okay (even the douchschnozzle florida fan that caused the whole mess and got away) and the wife is getting a brand new Porsche. Well, no. Probably not actually. Definitely.

Anyway, I wasn't going to leave y'all high and dry on a day like today. The chickens are coming to town and Kirby has shelved the Revenge Tour until after Thanksgiving. Since the doctor has set a word limit on all my blogging until Monday at the earliest, I hope you don't mind some simple pictures and then maybe a brief commentary/rant. If it doesn't get you quite fired up enough, light a Red candle, say the name "Erk Russell" seven times, then bash your forehead against a frozen chicken until you get a decent enough stream of blood.

Then by all means, shove a beer can up that bird's ass and throw it on the smoker!

"Coach Muschamp, after looking at some film, their third string running back


is just as fast and physical as Sony or Chubb..."
So some dude named Chris Clammons thought florida's defensive strategy of talking smack about Georgia's passing game worked so well that he'd kick it up a notch. "They can't pass."

Let's take a look at some future footage of him trying to tackle Swift shall we...

Yeh, that worked about as well as it did for the gators.

And lastly, "Coach Spurrier, remind me again how much you enjoyed your last trip to Sanford?"

Speaking of the ol' ball coach, what're the odds he had his résumé on the florida AD's desk by the time the sun set Sunday night?

Who are Gamecocks? What do they do?
You know, except lose. Why are they even here? Why do we need South Carolina? In the 69 previous meetings between the Dawgs and the gamechickens, they’ve managed 18 wins.

You want to know how shitty their football tackling program is? Ray Goff went 3-2 against South Carolina. From those three wins he now deep fries their white meat and sells it to people that’re starving for more triglycerides.

Have you ever been to a game in their off campus stadium that’s in the middle of a fair ground parking lot that smells like toe fungus and three day old half-cooked meat that’s just been left to sit out in the sun? No? Well, don’t. We lost by a field goal in 2014, one of the best games I’ve seen in the series to be honest. Close game, the kind of game where neither team deserved to lose. And yet I learned more lurid things that I didn’t know about my momma walking to my car than three years of therapy has yet to wipe clean.

You see, they’re not just wannabe rednecks, the ones that pretend they know how to hunt so they can justify the over-extended Bass Pro Shops Visa card and awkward camouflage assemble. And they’re not just average dipshits that like to spend Fall Saturdays pretending they went to school past the third grade before they dropped out and took a paper route to help feed daddy’s Busch Light and Marlboro addictions. No, they’re the third generation by-product of all that and a bag of bath salts.

Which happens to be why when you come across a Gamecock fan, you have a 78% chance of having an exchange similar to this:

“Hey buddy, did you walk to school or carry your lunch?”
“I...uh….uh, well, ya see, some days I remember...well...uh, hey! Uh, Hey! Did I say welcome to Zax Bee’s yet?”
“Okay, don't pull a muscle. I’ll just have your yearly desperation plate with an extra slice of toast. And a sweet tea.”

Now, please bow your heads...Dear Lord, I thank you for airbags and J.R. Reed. We pray for a total loss on my claim and an even totaler loss for them chickens tomorrow. Sic em on a chicken #Savages, all in the name of Pollack’s double inverse backwards interfumblerception, Amen!

Email ThisBlogThis!Share to TwitterShare to FacebookShare to Pinterest
Dawg Tags: bourbon and the * key, everything's cocky in Chickumbia, idiots not named Terence