Well, I was right about one thing. Rodrigo Blankenship is happy in Athens and sounds like he plans to compete and get better. Because at midnight, with only 14% left on his phone battery, he tweeted this out: 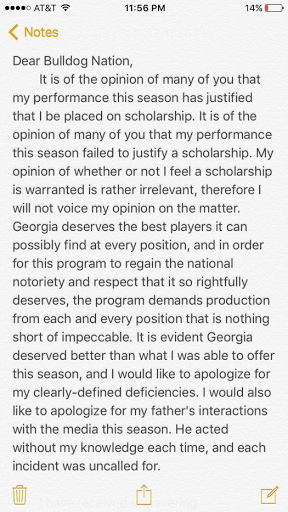 Maybe now the dad will shut up and let his kid play football.
Hunker'd Down by Bernie at 5:08 AM

So somewhat in fact that it wasn't enough for Kirby to grant Rodrigo a scholarship.

This whole thing just doesn't sit right with me. And I'll openly admit that there was a time when I might have felt differently, like the kicker had done enough to earn a full ride. But right now, not so much.

Maybe that's because he seemed to have a season that was too up and down to devote a scholarship at this point. Or maybe it's more to do with the fact that I understand this is the New Georgia Way and we must trust Kirby to run things.

Probably a good mixture of both actually.

What I do know is that I believe the elder Blankenship may have answered his own question when he added the adverb "somewhat" to his description of his son's season. Sure, Rodrigo helped win the game in Lexington back in November, kicking four field goals including the game winner. He made 77% of his attempts this past season, good for 6th in the conference. For a redshirt freshman I would mark that as something to (hopefully) build upon. 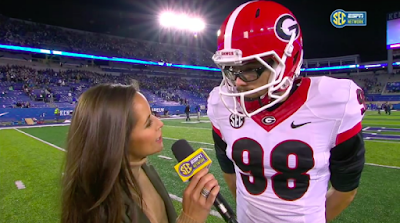 But what really puts the "somewhat" in front of the "impressive track record" for me is the 36% touchback number. Granted, special teams overall were not good this season so maybe that's just par for the course of having a special teams coach (heyoo! did I just type that?!?)

However, when a young coach is building a program and is heading into year two, I would imagine he'd have to remove the "somewhat" and at least be able to put a "damn" or two in there before he'd give up a precious scholarship.

Especially considering the run Kirby and Krew are on lately in getting top tier talent to either commit, visit, or both.

And one last thought...I can't help but wonder where Rodrigo himself lies. He seems pretty happy in Athens. I'm still a couple-few years from shelling out the benjamins for college tuition, so I won't completely throw Mr. Blankenship under the bus. But if Rodrigo were openly pandering for scholarship offers in other area codes (which I admit may still happen before next season), this parental email to the media to grab a few more headlines might carry a bit more weight.

For me, I hope he stays, competes, and has a great season. I know Rodrigo has worked hard. Be nice to see him carried off the field, maybe in Jacksonville. Or in Atlanta.