A litmus test for whether you, as a Georgia fan, should be worried about Auburn: 1) has their quarterback ever stolen a laptop? No, then 2) has he ever taken teammates cash and valuables from the team lockerroom? No.

Okay. So if Auburn somehow wins tomorrow, we’ll know this Stidham kid is hiding some shit in his dorm room closet.

Then…
It was close to a brotherhood really. I mean, there was no love lost between us. But it’s not like we met in Jacksonville each year to shout our disdain about each others’ mothers and general hygiene habits. We even shared fellow alumni/former players as coaches. Our campuses are one lazy drive away. We didn’t even complain all that much when they used our fight song, and we tolerated their cute yet inferior hedges with a modicum of respect.

And their schizophrenic loyalty to three different mascots at the same time was amusing if not downright...well, yeh it was kinda sad and pathetic even then.

But, there were times they’d beat the Gators and the Volunteers just to show they had our back. We did the same against Bama and LSU more than our fair share.

In 1996 we shared one of the greatest college football games that will ever be. An epic four overtime battle that turned boys into men right before our very eyes. God bless you Corey Allen. And may Robert Baker get a fair shot at his next parole hearing.

It was an experience that helped Georgia fans put the Game Between the Hoses from 1986 behind us on some level. It deepened our bond as fellow SEC compatriots. We drew closer, but always respecting the fact that we would always be on separate sides at least one day out of 365.

Then again. They lost. We won. So maybe that's just how I remember it.

...and now.
Fairley buried the crown of his helmet so deep into the back of our quarterback that we all felt the pain surge through our spines. Then he did it again.

No flags*. Of course not. The health and safety of an opposing quarterback shouldn't stand in the way of a plainsman title run pahtnah! And as if the salaciousness of buying players to grab that national championship wasn’t enough, they then resorted to taking Butts-Mehre outcasts and degenerates as their own, shoved them in our face, and essentially told us to get the hell out of town.

Auburn is like that best friend you had all the way through grade school. Until freshman year of high school, when he fell ass first into a Homecoming date with a junior cheerleader because his older sister owed him a favor because of that time Dad took Mom to that three day conference in Columbus and sister threw that party where Johnny Snodgrass got drunk on Bartles and Jaymes and threw up on GramGram’s handmade bedspread and the younger brother didn’t tell a legally responsible soul. After Homecoming he of course developed into a snot-nosed piece of shit that everybody else turned their back on because he somehow always thought he was the Big Man on Campus even though he didn't own a single pair of Nikes, wore a knock-off Members Only jacket from KMart, and ate by himself next to the teachers’ table sophomore, junior, and all of senior year until he walked across the stage of the gym through the jeers and sneers of two hundred and eighty-six other pissed off 18 year olds in cap and gowns (60% of which were also drunk on Bartles and Jaymes wine coolers).

I still hate that guy. Hell, he’s probably at some insurance seminar right now talking some sap’s ear off at the Holiday Inn Express breakfast bar about that one time he had a Homecoming date with Sissy “Two Bits” Kowalchuk and stayed out past 10pm. Asshole.

They drew the line, we’re just here to remind them of how often they have failed to cross it. Because that coach that bought them that natty, yeh, he’s now wearing a rented suit on the SEC Network jabbering like a mental patient that’s on the second of three frontal lobotomies. And their new coach, yeh, Malzahn is the equivalent of the high school kid that stole all the answers to the physics test but then fails the final every year because he can't even spell the word "formula".

Malzahn's glasses are just for show because he thinks it makes him look smart. If you take away his reclaimed 5star former safety he’s just a pink slip away from a job on an Opelika used car lot drinking day old coffee because Starbucks won’t validate his latte anymore.

Okay, let’s break this down for real...they’re central time zone. They’re an hour behind and three chromosomes short of a gene pool. We squeeze the Charmin just like the old commercial asks us to, but they rub it on their genitals and hurl it into trees to celebrate a victory, or just another successful evasion of an NCAA inquiry. We #keepchopping, they #keepdodging FBI investigations. We watch Netflix and chill, they go cow tipping and get ill.


They're plainsmen which is evidently the lovechild of a tiger that beds down with an eagle. We just wanna get after that ass! Go Dawgs and also screw it I’ll pronounce Jordan Hair any damn well I please and thank you very much! Now, bow your heads...Lord, please give Chubb 13 yards and any number of one hundreds he chooses. Also, please protect our traveling fans from their deviant time zone confusery. In the name of Wayne Johnson, Mike Bobo, and UGA V, Amen!!


*CORRECTION: the Senator provides video evidence of a flag after the third late hit. I would apologize, but I'm not yet ready. Go Dawgs!
Hunker'd Down by Bernie at 8:51 AM No comments:

But is Kirby a chess master?

Bear with me here...

We've seen the program take a giant step forward. The 9-0 record speaks for itself. But there's also the following to consider: an enormous uptick in recruiting, the starting quarterback gets injured and we respond by going on the road and beat the Fighting Irish, the fact that a starting linebacker can get popped for pot hours before a road trip and it's buried at the bottom of a sports page under the NHL standings, divisional rival programs are chomping at the bit to fire their coach just to keep up with a second year head coach from Bainbridge GA.

But what's most intriguing to me here leading up to the Auburn game is that Kirby and his staff are out-coaching those across the field. Tucker's halftime adjustments are second only to his pre-game game plan. Jim Chaney has gone from an inept doof with a whistle in between buffets to a bonefied game caller that dares defenses to stop the same play he just ran just so he can show you what his freshman quarterback can do with his arm.

I understand the nervousness for this next game. Auburn is better than they were last year when they seriously considered punting on second downs in Athens because their offense was so offensively incompetent. Stidham is a vast improvement over their disaster at the quarterback position in 2016.

But it's still Malzahn. He's dangerous only when he has the tools that he took from Richt's tool belt. As much as an improvement as Stidham is I still like our defense which has proven they can cover the entire field in big games, then they throttle down and pin their ears back.

Which is why I ask the question: Kirby has shown he can play the entire coaching game, from Mama's supper table to developing entire game plans designed to suck the life out of hostile stadiums. But is he two, three, or even four moves ahead of his opposition?

In other words, we were so vanilla on defense Saturday against the Gamecocks. Was that on purpose? We didn't need to blitz in Jacksonville, but Bentley could've used some pressure in his face. He has the arm to hurt you. Was Kirby just thinking, "No, we can handle these guys with the basics. Let's save those sexy looks for when we might need it, whether that's the fourth quarter today or next week on the plains."

It's only Wednesday, but I'm thinking we match up really well against this Auburn team. I think we can generate as much if not more of a pass rush that Clemson did the second week of the season. Despite only managing two field goals in last season's game, Chaney's offense still had Eason throw for over 200, and Chubb had over 100 yards as well.

Kirby knows Auburn. Tucker knows Malzahn. And if nothing else, they are still Auburn. And we're Georgia. 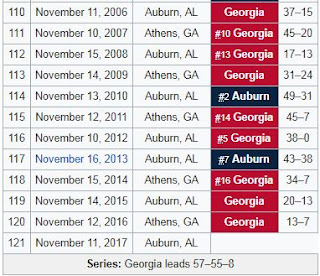 Hunker'd Down by Bernie at 8:14 AM No comments: