Jeff Schultz is right, this time.

Like you, I’ve been following and subsequently been confused by this Natrez Patrick affair. The facts are: 1) he’s known as much for being in the wrong pot at the wrong time as much as he is for making tackles, 2) the charges following the SECCG were dropped, 3) he subsequently both passed and failed a drug test, and 4) UGA is playing coy about his future.

Yesterday, the AJC’s most prolific pontificator since Terence Moore left town, Jeff Schultz weighed in. Schultz was his usual pompous, arrogant, click bait self. He pretended to know facts that he can’t possibly presume to know. He used the term “Bulldog Justice” with an air of both a thumb aside his nose and another up his ass.

UGA shouldn’t let Patrick play any more games with a G on his helmet. The dude has a problem and not the least of it is that he puts smoking pot above playing for the University that you and I hold dear. He’d rather continue to get caught in the wrong place at the wrong time than increase our team’s chance at winning. Or more personally, he’d rather take chances around random marijuana leaves, however minuscule, than potentially increase his draft stock this spring.

There’s one thing I do know. And that is that Patrick has one game, potentially two games left at UGA. He’s moving on to the NFL regardless after this season. We can pretend that it’s to further his game and play at the next level. But the truth is that, from what we’ve witnessed, it’s more likely that he’s moving on to be able to afford a better strain of weed.

To allow him to play in the Rose Bowl is to give him a pass. He won’t learn and at best he’ll go on to be an average player that continues to put a chance to smoke weed above being a team player. At worst he puts all that above being a good man, son, dad, human being.

This isn’t a political issue. I’m not for pot legalization and I’m not against it. I’m glad the Barrow county charges were dropped because they were bullshit, to be perfectly honest. This isn’t a football issue either. Life is bigger than football.

This is a personal issue. Kirby has a chance to help both his player and the program. What does every other player that practices hard and puts the team first learn if Natrez plays in Pasadena?

Yes, we are the new Georgia. We signed on for this and Kirby has us at the precipice of something special. But the truth is we don’t need Natrez Patrick to beat Oklahoma any more than we needed him during the games he was suspended. We can still be bigger than the issue, the lawyers, the newsprint, and the charges that #6 has brought to the spotlight.

We’re still Georgia. We can win with players that truly want to play football. And if I’m being perfectly honest, I’m not convinced Natrez Patrick really wants to play football.
Hunker'd Down by Bernie at 6:56 AM No comments:

Now that the bowls have started, have you noticed how much air time Georgia is getting in half-time commentary, ESPN playoff commercials, and general highlights? Although it still feels a little surreal, it also is helping it to hit home that "HOLY CRAP! We're in the CFB Playoffs and have to play Oklahoma y'all!"

We were in Virginia visiting the in-laws this weekend. The wife and I went into a local grocery store and were immediately met by the Salvation Army greeter who gave us a solid and boisterous "Go Dawgs!" upon seeing our red and black attire. He explained that he wasn't a Georgia fan but he'd be rooting for us. It seems fans that have no dog in the hunt still like a good Dawg to pull for. 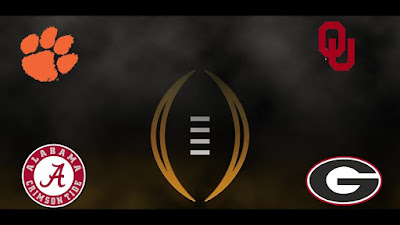 Then as we were checking out a dude came up behind me and practically screamed "I hope y'all beat Bama!" I turned around and it was a guy wearing an Ohio State jacket and cap. He had strong opinions about how the Tide got in the playoffs despite a weak schedule and subsequently screwed over the Buckeyes.

Funny how he didn't want to talk about Iowa or 2016's version of Penn State getting left out. Anyway, it's cool seeing your team get so much air time. And I bet there are plenty of "Dawg fans in Exhile" enjoying the fact that the Dawgs are firmly in the national spotlight and have had similar experiences to the one we had at a Richmond area Kroger.

It's a fantastic addition to this Holiday season thus far. And a reminder that the coaches and staff are probably more nervous than a long-tailed cat in a room full of rocking chairs about the players losing focus and getting a lot of this talk in their ears.

Two weeks from today!! Go Dawgs!
Hunker'd Down by Bernie at 11:47 AM No comments: