Georgia vs. Alabama, the rushing game

One thing is clear, whichever team has the ball Monday night will be trying to establish the run. The Dawgs and the Tide, respectively, are one and two in the conference in rushing the football.

But how they go about achieving that goal are two vastly different animals.

Georgia uses a variety of sets and looks to get Nick Chubb and Sony Michel, college football's most prolific backfield tandem, into space. Offensive coordinator Jim Chaney wants to have the opponent's defense sufficiently worn down in the fourth quarter when he can even insert D'Andre Swift into the huddle with fresh legs.

For a great reference to that point, make sure you've thoroughly vetted this post by The Senator where he specifically points out how Oklahoma's secondary grew tired of being blocked the deeper into the game they got.

By contrast, Alabama uses multiple looks as well, but they rely heavily on the legs of Jalen Hurts, not to mention his ability to make the correct reads in the read-option and run-pass-option. 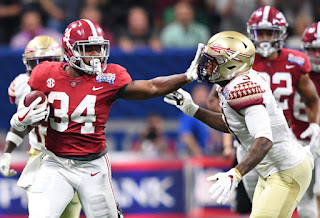 So when someone tries to tell you that this is just the same ol' Bama, take that with a grain of salt. Because they don't have that heavy bruiser of a tailback that they use to tote the rock 20-25 times a game.

Damien Harris is a strong runner and likes to get downhill. He's also athletic, something usually attributed more to his colleague Bo Scarbrough. But together they really handle most of the handoffs, albeit to the tune of just 19 carries/game combined (via cfbstats.com)

And that's because this is Jalen Hurts' show. He doesn't have as many yards as Harris, but he has the most carries. For the most part he does a good job of reading the defense and determining which run option is best.

However, he ain't perfect. This video of Sugar Bowl highlights gives you an idea of how they utilize the running backs mentioned, but also shows you that Hurts can get flustered. For instance, pay particular attention to the moderate pressure (at best) up the middle Clemson throws at him at about the 2:30 mark when they are able to force a fumble off a bad read and exchange.

That's something, as we discussed yesterday, that could play into Coach Tucker's hands. The Tiger linebacker is really just making a read and playing off of Hurts' eyes. I wouldn't even call it a blitz. Plug Roquan in there on a favorable down and distance and it could definitely lead to a positive result.

That's all well and good. But no matter what anyone (myself included) writes or what any expert on the television tells you this week, we all know from past meetings that this game will come down to which team controls the line of scrimmage best.

In the 2012 SECCG it was practically a draw at the line of scrimmage until late when we had used pretty much the same defensive front the entire game. John Jenkins was gassed and we couldn't stop Eddie Lacy or TJ Yeldon.

Tucker's defense is much more versatile than Grantham's 2012 version. And the point of this post is to highlight the possibility that Alabama's offense is less versatile today than it was then. In other words, stop Hurts and you stop the Tide. They just don't have that one running back that can wear on you from down to down.

Well, to be honest, I think Harris especially fits the bill. It's just that they don't use him that way. Perhaps I just haven't watched enough of them to know that they just don't need him or Scarbrough as much as Hurts. In Harris' best game against Vandy he had 12 carries for 151 yards. In the close game against Mississippi State thogh he was averaging over 11 yards a carry but only touched it eight times. Meanwhile Hurts had 19 carries for two yards a clip (sack yardage included).

Have they been saving 34 and 9's legs just for this game Monday?

In the end I'm going to give Georgia the edge in the rushing game, all while hoping I'm not just seeing what I want to see. Because admittedly, I've watched a lot more of Georgia than Alabama. I just see our rushing attack as much more versatile.