GDay - what I'm looking for tomorrow

First of all it will be interesting to see how many folks get turned away. With only 78,ooo seats available tomorrow and record crowds for this event thus far under Kirby’s watch, ain’t everybody gonna get a first hand look at Justin Fields arm and Holyfield’s legs.


Regardless of seating arrangements and availability, I think the first thing I want to see is how well the middle of the field is covered by our defense on passing downs.
You see, one does not just replace a player like Roquan Smith. It’s impossible. But I have great confidence that the coaches have recruited talent behind him. So I’m confident that we have someone that can blitz through the heart of the offensive protection. Afterall, the name Natrez Patrick comes to mind. And I’m confident we may have someone that can defend the field laterally from sideline to sideline.


But what made Roquan so very special was how well he defended the middle of the field in passing situations. He could cover a tight end. He could take away a slot receiver’s crossing route. And there was nary a team that would dare to throw a middle screen in front of Roquan Smith.

In other words, opposing quarterbacks had a lot to process at the line of scrimmage when they looked across and saw Roquan staring at them. Were Monty Rice and Nate McBride paying close attention? I hope so. And again, I have full confidence that the coaches have recruited the right players.

Because it’s been since before the disgraceful John Jancek linebacker coached era that we could defend that area of the field on any down that effectively. I miss Roquan a lot already. I’ll miss him a lot more if we see a lot of successful seam routes and crossing patterns.

Elijah Holyfield should have himself a day. The fans aren’t the only ones I suspect that want to see how he manages 20 or so touches in a game(like) situation.

Pass protection. Kirby says it is structured to be a quarterback’s game. As nice as it is to have a true sophomore quarterback that lead us within a breath of a National Championship, I think everyone would be thrilled if Justin Fields made some plays. Still, in a spring game it’s hard to gauge things like pass protection. However it will still be something to keep a close eye on.

And not just for the obvious reasons of seeing how the coaches rotate tackles and guards. We lost two absolutely amazing pass protection runnings backs in Chubb and Michel. Holyfield and Herrien have big shoes to fill as (probably) the only scholarship backs available tomorrow. We know Fromm can hurt teams with his arm as well as his legs if need be. And we suspect Fields will eventually be able to do the same to opposing teams’ defense. But we’ll need to have solid pass protection, and that sometimes means a small running back stepping up into the path of a blitzing monster.

Special teams are typically hard to truly evaluate, but Kirby had this to say yesterday:

“Our special teams, we think we’ve got some good competition going on, so we’ll be coming after punts, we’re going to do everything real on kickoff and kickoff return, we’re just not going to tackle live,” he said. “But everything is going to be as real as possible other than that. Same thing with punt and punt return, so we’ll be rushing them and we’ll have punt returners back there trying to return them. We’ve got great competition at punter, great competition at returner. I’d love to see some guys have some pressure on them and have to make kicks and catches.”

So perhaps we can at least see some of these punters under rushed conditions. And those are a few things I’m watching for, in addition to seeing some new guys that have supposedly stepped up big thus far, like Brenton Cox and Cade Mays. What’re you ready to see from some football in April?
Hunker'd Down by Bernie at 9:50 AM No comments:

Whoever holds the number one quarterback position at Georgia is often under the spotlight, but Jake Fromm may be under more pressure than most in 2018. After beginning last season as a backup, he was thrown into action and stood up tall to serve his team and take them to the Championship game. Despite losing that game, Fromm has earned huge recognition from scouts, coaches, and fellow players for the way he embraced his situation last year.
And this time around there could be a lot more to come from him. 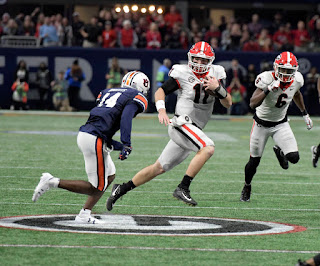 Fromm came from out of the blue after an injury to Jacob Eason, and since then he has never looked back. Coming in with nothing to prove last season, he will face a very different proposition this season when the games get underway. The decision to play Fromm last September when Eason went out in the opener was an easy one. Now, many expect newcomer Justin Fields to challenge for playing time sooner rather than later.
That adds some pressure for the incumbent sophomore signal caller in Fromm. Plus, the expectation will be that Fromm will not only replicate last season’s play, but build on it thanks to that experience, as well as show himself off as being one of the better young quarterbacks in the conference and the nation.
Fromm has shown a penchant for handling the pressure, both on the field and off of it. And all indications are that he’s embracing the role of “seasoned starter” well thus far.
The pressure is on Fromm already, because many people are looking at him as a possible Heisman Trophy winner. The latest betting shows he is 12/1 to lift the Heisman. One reason Fromm is such a big price is that some people still believe that last season was a fluke, and he hasn’t improved enough to be a starting quarterback. Should Fromm go out and throw brilliantly in his opening two or three games of the 2018 season, then he will become a genuine Heisman contender, his price will certainly fall.
The road to where he is now has been a strange one for Jake Fromm, but no one can argue that he has taken advantage of the opportunities given to him. He now heads into a new season where he is being talked about as a potential Heisman Trophy winner, so has a bit of pressure on his shoulders. However, we know from watching him mature so quickly last season that he has a good head on him, and is more than capable of handling that pressure.